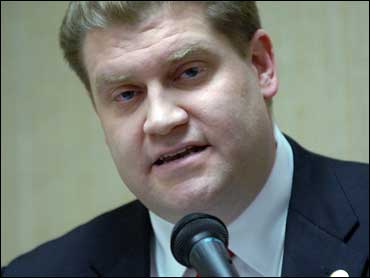 West Virginia University President Mike Garrison said Friday he will resign in September to end the controversy surrounding the improper awarding of a master's degree to the governor's daughter.

"After careful reflection, I have determined I am the one person who is uniquely situated to stop this dialogue with my decision," Garrison told the school's Board of Governors. "It is the most difficult decision I have ever faced. But it is a clear decision with a clear outcome."

The 39-year-old Garrison's nine-month administration has been dogged from the start by the degree scandal and the sudden departure of former football coach Rich Rodriguez that triggered a $4 million lawsuit by WVU over a buyout clause in his contract.

Last week, after meeting privately with Garrison and key staff, the Board of Governors declared Garrison had done nothing wrong in the matter of Mylan Inc. executive Heather Bresch.

Though an independent panel found there was no evidence that Garrison interfered, it was on his watch last fall that WVU administrators added courses and grades to Bresch's incomplete transcript, awarding her a 1998 executive master's business of administration degree she'd been claiming on her resume.

The controversy has prompted newspapers and alumni to call for Garrison to resign. Also, a growing number of alumni have said they would not donate until Garrison left.

Despite two faculty votes demanding he resign, Garrison said he stayed because he was asked to by the board and because it was what he believed a leader should do.

The board called Garrison's decision to leave "unselfish."

"Your decision today should initiate a call to heal divisiveness and to move forward," said Steve Goodwin, the board's chairman.

"Sometimes this great university and that public trust are far more important than any one individual and any one issue," Goodwin said. "Mike Garrison demonstrated that by his unselfish action."

There was no immediate word on what Garrison would do until his resignation takes effect Sept. 1, or when the Board of Governors would start looking for a successor.

"I will always stand with this university. I will stand in whatever way I can serve," Garrison said. "And I ask that Mountaineers everywhere stand together, now more than ever, to move West Virginia University forward."

Gov. Joe Manchin said he understood how difficult it was for Garrison to resign and he should be commended.

"Today's actions were obviously taken with great care, and it is my sincere hope that all who truly love WVU will appreciate the president's and the board's efforts and will work with them in the coming months to continue to move the university forward," Manchin said in a statement.

English professor Lisa Weihman was among the dozen faculty members at the meeting.

"I don't think anyone is celebrating this," she said. "It's a very sad occasion."

Weihman said Garrison's departure should be a first step toward changing how the university is governed. She urged the board to make the presidential search "inclusive and transparent."

The announcement overshadowed what Garrison saw was his greatest achievement: The largest pay raise for faculty and staff in recent memory. Garrison made pay increases a priority last year as he lobbied to become president.

Under the $26.4 million plan, faculty salaries would increase an average of 7.3 percent, or $4,590. The board did not take immediate action on the proposal, which Garrison said was crucial to recruit new faculty from across the country.