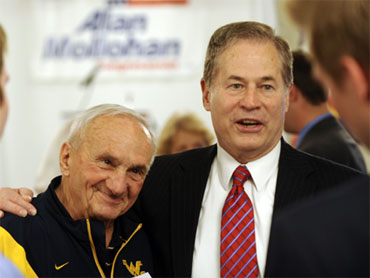 Democrat Alan Mollohan became the first member of the U.S. House to be ousted this spring primary season after his opponent mounted a campaign that questioned the 14-term congressman's ethics and support for federal health care reform.

The more conservative Oliverio ran an aggressive campaign, portraying Mollohan as corrupt and out of touch. Conservative media rallied around the 46-year-old financial adviser from Morgantown, as did anti-abortion groups angry over Mollohan's support of health care reform.

Mollohan, 66, said his defeat was proof that negative campaigns still work and called Oliverio's attacks "totally spurious and totally false." But he acknowledged that he faced a "strong headwind" because of the national political climate, voter discontent and anti-incumbent sentiment.

"It's true there is definitely a wave out there, a national mood and wave," Mollohan said after his defeat.

Midterm congressional elections are referendums, he said, "and if people are not feeling good about what's happening, if they don't agree with legislation or they just are concerned, they express it."

Mollohan stood by his record, but acknowledged to about 150 supporters that he could have been marketed better.

Oliverio said his campaign worked because it focused on fiscal responsibility and personal integrity.

"We announced our campaign 100 days ago, and in 100 days' time our country has fallen one-third of a trillion dollars further into debt. We have to get the country's financial house in order, and that's what we're committed to doing," he said.

McKinley said he was not surprised by Mollohan's ouster because "people just didn't like what was happening in Washington."

The outcome is a referendum on President Barack Obama and his policies, from bailouts of banks and takeovers of car companies to health care reform, he said.

"It's clear this is not the agenda they wanted. This wasn't the change they envisioned," McKinley said of West Virginia voters. "I think this is what this campaign is going to become in the fall."

For his part, Mollohan insisted that most of his constituents wanted the health care reform he has championed for years. He said he works hard to ensure no public funds are used for abortions and is confident the legislation achieved that, even though the National Right to Life Political Action Committee endorsed Oliverio.

"I feel good in my heart tonight," said Mollohan, standing with his wife and son. "We feel like we have worked really hard and have done many, many good things in the district."

Mollohan was first elected in 1982. He ran a relatively lethargic campaign until recent weeks, when he began airing TV ads calling Oliverio dangerously conservative and bad for business and labor. Oliverio had campaigned aggressively since entering the race in January.

Mollohan dismissed the attacks as a smear campaign that began four years ago when he refused to let House Republicans undermine ethics committee rules to try to protect former Majority Leader Tom DeLay of Texas.

In 2006, the Justice Department opened an investigation of Mollohan that is believed to have focused on the rapid growth of his personal wealth and his pattern of securing federal funds for nonprofits he helped create.

Mollohan stepped down as the ranking Democrat on the House ethics committee that April and stepped aside in early 2007 from a subcommittee that handles funding for the Justice Department.

The investigation ended in January without comment or charges - which Mollohan considered vindication.

The ethics probe was also a focal point of the Republican effort to defeat Mollohan in 2006, but he carried 64 percent of the vote over GOP challenger Chris Wakim. In 2008, Mollohan went unopposed.

Oliverio insisted he was the Democratic Party's best hope at securing the seat it has held for generations.

Rep. Shelley Moore Capito was unopposed in the 2nd District Republican primary and will face former Catholic nun Virginia Lynch Graf, who was also unopposed, in the fall.

Rep. Nick Rahall easily defeated a little-known challenger in the 3rd District Democratic primary and will face one of four Republican challengers this fall.