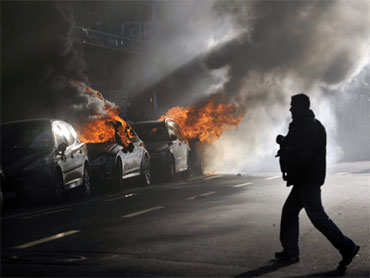 Police with water cannon fired tear gas and rubber bullets Saturday to separate violent demonstrators from a protest opposing a meeting of top world trade officials, but the hooded "black bloc" activists were able to cause damage before 14 were arrested, spokesmen said.

Geneva Police Chief Monica Bonfati said officers arrested four looters in addition to the protesters. No injuries to police or protesters were reported, but an 80-year-old women lost her balance and fell, and had to be hospitalized, police said.

The clashes occurred during a march by thousands of demonstrators protesting against a meeting of the World Trade Organization (WTO), set to start on Monday, in which the United States, China and other commercial powers are expected to spearhead the latest attempt to revive world trade.

Bonfati told Swiss television TSR that police were able at the beginning of the demonstration to identify about 200 members of the black bloc - violent elements that join other demonstrations to cause damage. She said they were spread out along the route and police had to separate them from the other protesters.

"They also damaged 12 businesses, including a bank at Place Bel-Air and a jewelry shop and a hotel on the Quai des Bergues," he said.

Besides the burned cars, 15 other vehicles, including three buses, were damaged, he said.

Police said the 3,000 protesters included three distinct groups of troublemakers who broke away to attack cars and hotel and shop windows, then rejoined the march, pretending to be peaceful. Organizers claimed there were about 5,000 protesters in total.

The group Anti-WTO Coordination said it "regretted being unable to finish the demonstration and deliver the planned speeches."

It said a few protesters had used the demonstration for their own ends.

Nevertheless, it said, "the international and local mobilization is a success" and it condemned "unreservedly all police repression violating democratic rights."

Much more serious clashes have occurred at previous meetings of trade chiefs, but the coming session lacks the specific goals of previous meetings, when the World Trade Organization tried to conclude a new trade deal. The last so-called ministerial was held in Hong Kong four years ago. Others were in Cancun, Mexico, and Seattle.

WTO opponents claim the agreements produced by the body foster the growth of wealth among corporations at the expense of farmers, workers and others at the low end of the economy.

Swiss officials refused entry at Geneva Airport on Friday evening to three South Koreans who wanted to come into Geneva because Swiss security specialists judged them to be capable of violence, Puhl said, noting that other countries had previously barred the three for the same reason.

The WTO called the meeting of its 153 members to examine major issues at a time when global exports are falling rapidly and the WTO's long-sought Doha liberalization round is limping into its ninth year.

Instead of sensitive tariff and subsidy negotiations, the conference running Monday through Wednesday will focus on the big picture - stabilizing and rejuvenating commerce in the face of increased protectionism, unemployment and exporting of jobs.

The WTO had hoped to avoid the acrimony and the sometimes-violent protests that have plagued previous ministerial conferences. Geneva police have taken a number of steps to ensure the security of the meeting place.

Swiss officials also refused entry at Geneva Airport on Friday evening to three South Koreans who wanted to come into Geneva because Swiss security specialists judged them to be capable of violence, Puhl said, noting that other countries had previously barred them for the same reason.