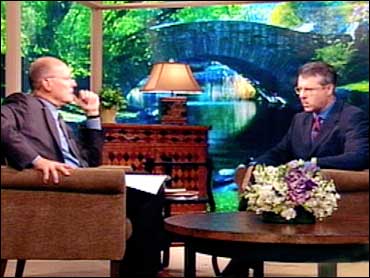 There's no question that words can change the world, and there's no better proof of that than the famous words spoken by President Reagan at the Berlin Wall back in 1987.

Two years later, the wall came down. The man who wrote those words is Peter Robinson, who spent six years as a speechwriter in the Reagan White House. He has a new book about his experiences, titled "How Ronald Reagan Changed My Life."

He tells The Early Show co-anchor Harry Smith, President Reagan seemed to him larger than life.

Robinson says, "He seemed like a figure carved on Mount Rushmore. And I was constantly perplexed by how he did it. How did an actor persuade the American people to take him seriously? How did he move people? Bit by bit, by living in the White House, studying him closely, I can remember the moment when I realized, he's human after all. He'd come back from cancer surgery and he spoke to us all in the White House. The chief of staff at the time wanted everyone to see the president was back to normal. And his shirt collar was too big because he had lost so much weight. I thought, 'oh, no, he's one of us.' For me a baby speechwriter, I was just 25 when I took the job, it was a lesson in itself."

The other thing Robinson talks about is the idea that Ronald Reagan seemed so lucky. But one of the things that he demystifies in the book is that the former president was anything but lucky.

Robinson says, "I thought at first he was surreal because he had been lucky all his life. Good looking, became a radio announcer, movie star, married at an early age. Not true. His father was a drunk. It is clear in his boyhood he went through one scary experience after another as a result of that. He was profoundly in love with his first wife, movie star Jane Wyman. After eight years, after what he thought was a happy marriage, she divorced him. Then after marrying Nancy Davis and starting a second family, he was still in his early 40s, his career as an actor dried up. So he had his full share of life's misfortunes. What I discovered, what I decided watching him was from an early age he had to learn to find the good, even in dreadful situations. I think it was probably his mother, her simple faith passed on to him. He understood in a deep way that life was fundamentally good."

Robinson is the host of the PBS television program, "Uncommon Knowledge," and the author of two previous books, "It's My Party: A Republican's Messy Love Affair with the GOP" and "Snapshots from Hell: The Making of an MBA." A fellow at the Hoover Institution, he lives in Stanford, Calif.

Read an excerpt from "How Ronald Reagan Changed My Life."

Chapter One
The Pony In the Dung Heap
When Life Buries You, Dig
Journal Entry, June 2002:

The joke concerns twin boys of five or six. Worried that the boys had developed extreme personalities -- one was a total pessimist, the other a total optimist -- their parents took them to a psychiatrist.

"Reagan told the joke so often," Meese said, chuckling, "that it got to be kind of a joke with the rest of us. Whenever something would go wrong, somebody on the staff would be sure to say, 'There must be a pony in here somewhere.'"

The other day Josh Gilder, one of my colleagues on the Reagan speechwriting staff, reminded me of Mr. Cho, the barber Josh and I discovered a couple of blocks from the White House. Mr. Cho had come to the United States from somewhere in Southeast Asia -- Thailand, as I recall -- where it was the custom for a barber to massage each customer's scalp before cutting his hair. When you sat in his chair, Mr. Cho would rub your scalp with the palms of his hands, then knead it with his fingertips. He'd work his way slowly up both sides of your head to your crown, then forward to your eyebrows, then backward to the base of your skull. When Mr. Cho finally finished the massage and began cutting your hair, you'd feel so relaxed that you'd have to grip both arms of the barber chair to keep from sliding onto the floor.

For the six or seven months from the time we discovered him to the time Mr. Cho moved to a new barbershop in the suburbs, Josh and I found ourselves getting our hair cut almost once a week. Soon we stopped thinking of Mr. Cho as our barber and began thinking of him as our therapist. Our visits to the barbershop amounted to our own modest exercises in stress management. Mr. Cho helped us cope.

On a typical afternoon, for instance, Josh and I might have drafts of two or three speeches spread across our desks. The telephones would be ringing. Members of the National Security Council or the Office of Management and Budget would be pestering us for rewrites. Our boss, Tony Dolan, the chief speechwriter, would be clomping down the marble-tiled hallway in his cowboy boots to ask us whether in writing certain passages we had actually intended to cause pointless trouble with the senior staff or had simply gone out of our minds. When it got to be too much, Josh or I would telephone the other.

Josh and I have agreed ever since that only one other event could compare with a visit to Mr. Cho. That was a visit to the Oval Office.

"Reagan's presence was just -- I don't know, remarkable," Josh says. "We'd go in there, all worked up over staff wars or the way the researchers weren't doing their work. We might even have been worked up over something important for a change, like the Sandinistas or the situation in the Middle East. Then Reagan would calm us right down. He was just so sweet and serene. A few minutes with the guy were just as good as one of Mr. Cho's massages. Remember?"

Would I ever forget? Ronald Reagan's serenity taught me one of the most important lessons of my life.

The Un-Sheen
For a long time, though, I just couldn't figure it out. I made a mistake about Reagan that you'll understand immediately if you've ever watched the television program The West Wing. The program does a good job of portraying the intensity in the White House -- people who work there really do look serious, speak earnestly, and spend half their days taking urgent telephone calls and the other half hurrying to vital meetings. My mistake lay in assuming that the intensity must reach a peak or climax in the person of the President. If the people who worked for him were driven and harried, it stood to reason that the President himself must be the most driven and harried of all. The West Wing makes the same assumption. Just look at the way Martin Sheen plays the role of chief executive. The man's anguished soul searching never lets up.

Yet in the Reagan White House, the intensity didn't peak in the person of the President. It evaporated. Where Sheen often appears rumpled, Reagan always appeared immaculate, his shirt unwrinkled, his tie snugly knotted, a knife-edge crease in his trousers, his shoes gleaming ...

The foregoing is excerpted from "How Ronald Reagan Changed My Life" by Peter Robinson. All rights reserved. No part of this book may be used or reproduced without written permission from HarperCollins Publishers, 10 East 53rd Street, New York, NY 10022

Tammy Faye: 'I Will Survive'