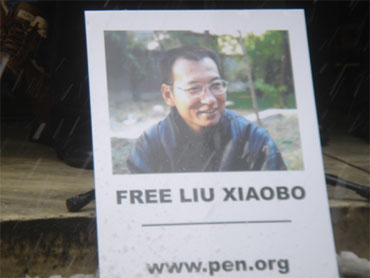 Don DeLillo, E.L. Doctorow, Edward Albee and A.M. Holmes were among the writers who gathered Thursday to call on China to release writer and activist Liu Xiaobo, who was sentenced to 11 years in prison for "inciting subversion of state power" in his writings.

Liu, the most prominent dissident in China, was sentenced on Christmas Day. He was one of the authors of Charter 08, a petition circulated last year that calls for greater freedoms and democratic reforms in China.

The petition includes the line, "we should end the practice of viewing words as crimes."

The writers who assembled for the protest read the passages deemed subversive by the Chinese government, as well as poems Liu wrote during a three-year term in a labor camp in the late 1990s. They also read from the verdict against Liu.

Among the sentences deemed subversive is Liu's assertion that "since the Communist Party of China took power, generations of CPC dictators have cared most about their own power and least about human life."

As snow fell and a small crowd watched, writer Honor Moore, standing on the steps of the main branch of the New York Public Library, read a portion of the verdict against Liu.

"He wrote the documents and used the Internet to publish them in order to slander and urge other people to overthrow our country's democratic dictatorship and our socialist system," the verdict said. "...The published documents have been spread through links and republishing. People read them and they have a bad effect. This is the crime of a major criminal and should be severely punished according to the law."

After reading one of Liu's poems, Doctorow, the author of "Ragtime" and other books, criticized the Chinese government for its "sorry record of artist intimidation."

"China supposes to lead the world into the future...but when it jails its people for their thought, it is mired in the past with the ghosts of emperors and dictators and kings, along with military thugs and theocracies like Iran's that rigs its elections and shoots down its people in the street," he said. 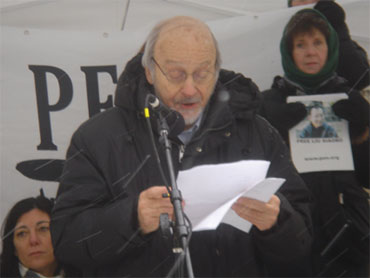 (CBS/Brian Montopoli)
"The civilization of China cannot lead when its revolutionary government simply changes the style of despotism, can't move forward when its poets and writers and artists, its thinkers and intellectuals are muzzled in silence," continued Doctorow (pictured at left). "Under such conditions the genius of a nation withers and dies."

Liu, who is 53 years old, had been in detention for nearly a year before his sentencing. He is appealing the verdict, though appeals in sensitive cases like his are almost never successful.

American leaders have criticized the decision against Liu, who gave up his position at Columbia University in 1989 to participate in the Tiananmen Square protests. Last week U.S. Embassy First Secretary Greg May said America is "deeply concerned by the sentence," adding that "persecution of individuals for the peaceful expression of their political views is inconsistent with internationally recognized norms of human rights."

The harsh sentence against Liu was widely seen as a warning directed at other activists in China. At his trial, which was hastily scheduled and lasted just three hours, the defense was not permitted to present evidence.

Liu is a member of PEN, the international human rights and literary organization. The group planned the rally in an effort to attract more attention to the verdict against Liu, which went relatively unnoticed in part because it came down on Christmas Day.

"Old friend, we will not forget you," Appiah said. "We will not rest until you are free."
by Brian Montopoli