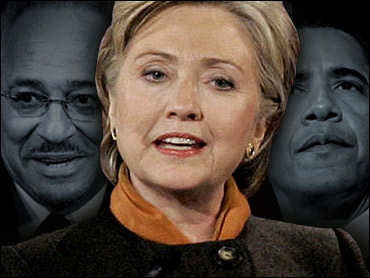 This story was written by John F. Harris and Mike Allen.

For the first time since her humiliating third-place finish in Iowa nearly four months ago, Clinton aides aren't privately rolling their eyes at their own campaign bluster - even if the evidence of a comeback so far is still less than a roar.

For the past couple of months, Clinton has been resting her hopes - and resisting calls to drop out - on the possibility of a game-changer, some unforeseen event that would change the prism through which the media, superdelegates and average Democrats are viewing her uphill campaign against Barack Obama.

It won't be clear until the May 6 primaries in Indiana and North Carolina whether the game really has changed. But recent days have shown that the ground has shifted in important ways for her.

Some are concrete: better fundraising, well-timed endorsements and a spate of polls showing how Obama's relationship with the Rev. Jeremiah Wright has broken skin politically. Others are more intangible: crisp performances by Clinton at a time when the usually poised Obama has appeared more rattled than at any time in this campaign, as well as a Clinton campaign team that is no longer defeatist and morose behind the scenes.

By no means are they effusive. Under their best-case scenario, Clinton advisers believe she will be about 100 delegates behind Obama when the primary season ends on June 3.

But if the mathematics of the race has not changed, aides believe the psychology has.

Before, the Clintons knew they were fighting a story line that said she could never win unless superdelegates take the nomination away from a popular African-American who came in first.

Now they hope that they have subtly shifted to a new story line: Superdelegates must think twice before bestowing the nomination on an increasingly controversial politician who has missed repeated opportunities to wrap up the contest with a decisive, big-state victory.

"We always knew she'd win when the press started treating the candidates equally and the voters got her message," said Terry McAuliffe, Clinton's campaign chairman.

McAuliffe, who talks to the senator and former President Bill Clinton constantly, said they have always remained optimistic.

"I never thought she'd gone anywhere," McAuliffe said. "She is the same candidate she's been for the last 16 months. But now the press is paying more attention to her and she can come back and win."

McAuliffe is characteristically the most ebullient - even Pollyannaish - of Clinton's surrogates. But it's clear that even more jaundiced members of her camp now feel that at least some measure of optimism is justified.

Their scenario depends on emphatic victories in Indiana and, a week later, in West Virginia, fueled by the same type of white, working-class Democrats who backed Clinton in Ohio and Pennsylvania, while keeping an all-but-certain Obama win in North Carolina narrower than is expected.

According to this line of argument, these results would allow Clinton operatives to credibly stoke "buyer's remorse" feelings among superdelegates.

It remains a long shot by almost any calculation. Last month, a Clinton adviser estimated to Politico that she had no more than a 10 percent chance of winning. And as of Tuesday, Obama has gained 38 superdelegates to Clinton's eight since the March 4 primaries, when she slowed his momentum with victories in Ohio and Texas.

This means even good news for Clinton comes framed by bad context. The mood inside her campaign is akin to that of a near-terminal patient who gets aproved for new experimental therapies: Maybe something will work.

After sketching her potential path to victory, a Clinton adviser said: "Thirty days ago, I could have given you this rap, but you wouldn't have believed it. Thirty days later, I can give you this rap and you say, 'You know, you might be right.'"

"She's relaxed and she's in her groove," crowed a senior Clinton aide who had been downbeat. "The story of this race is these twists and turns."

And for the moment, the twists have turned in her direction.

This includes the fact that April was the second-best fundraising month for her so far this campaign, helping ease a severe financial drought. She won the endorsement of North Carolina Gov. Mike Easley.

And two recent polls have buoyed her. An Associated Press-Ipsos poll showed her beating Republican John McCain 50 percent to 41 percent while Obama was running 46 percent to 44 percent in the same matchup. A Fox News poll Wednesday showed her outperforming Obama among independent voters.

Most important, the Fox poll highlighted the potential damage Wright has caused Obama. Among Democratic voters, 36 percent said they were concerned either somewhat or a great deal about Wright, and 64 percent said they believed the controversy has hurt Obama's campaign.

From the Clinton vantage point, the best thing about the Wright story is that it is being driven by the media, rather than by attacks from her, which carry the risk of a backfire among Democrats who want their candidates playing nice.

"Our view is, this is his story," the Clinton adviser said. "He's going to have to answer it and deal with it."

Obama aides say this week's news cannot obscure the larger reality: Clinton is behind with no obvious paths to getting ahead.

"Superdelegates are her only path to the nomination, and she has been losing them at a rate of 9-to-1 since Feb. 5," an Obama aide said. "If she can't get them now, when will she get them?"
By John F. Harris and Mike Allen