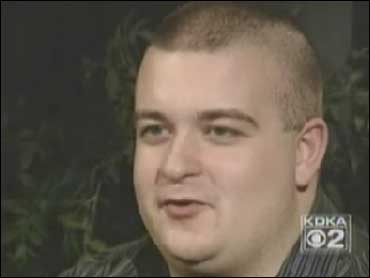 Jordan Fox received a $10,000 signing bonus when he joined the Army. The Mt. Lebanon man served his country in Iraq, where as a sniper he survived machine gun battles and a roadside bomb that knocked him unconscious and blinded him in his right eye.

The injury forced the military to send him home. A few weeks later, Fox received a bill from the Department of Defense, saying he owes the military nearly $3,000 from his original enlistment bonus because he couldn't fulfill three months of his commitment.

"I tried to do my best and serve my country and unfortunately I was hurt in the process and now they're telling me that they want their money back," Fox told CBS station KDKA-TV.

This is apparently not an isolated bureaucratic foul-up. The military is allegedly demanding that thousands of wounded service personnel give back signing bonuses because they are unable to serve out their commitments.

To get people to sign up, the military gives enlistment bonuses - up to $30,000 in some cases. Now men and women who have lost arms, legs, eyesight, hearing and can no longer serve are being ordered to pay some of that money back.

Military regulations do allow for discharged soldiers to be forced to pay back part of their enlistment bonuses if they do not serve their entire commitment, if they were found to have "pre-existing" conditions, such as psychological disorders.

As part of an investigation by KDKA into the letter to Fox, the station contacted the Pentagon. After looking into the matter, a military spokesman told KDKA correspondent Marty Griffin that the bill sent to Fox was a mistake.

"We have seen where the problems have been made [in] the system," Major Nathan Banks told Griffin. Banks said the military was working to "make a wrong a right."

But the Pentagon refused comment on allegations that thousands of other soldiers just sent home wounded from Iraq and Afghanistan will receive these sorts of bills.

Fox has been helping with a local charity founded by his mother, Operation Pittsburgh Pride, sending care packages to troops in Iraq. Because of his battle wounds Fox unfortunately will not be able to pursue his dream of being a police officer.

News of the military's letter to Fox spread quickly after being reported by KDKA. "It's blown up very quickly," Fox said. "I'm kind of shocked and a little embarrassed by it all."

Shortly before appearing on a national TV interview last night, Fox was informed that the Defense Department had relieved his debt.

"He has nothing to pay now," Banks told KDKA correspondent David Highfield.

"Hopefully this will turn into change for not only me but many other soldiers that have lost limbs, become permanently deaf," Fox said. "I hope to see a change for everybody."

"I need to push as hard as I can to stop this, because it's just not right."

Rep. Jason Altmire, D-Pa., told the station that he has proposed a bill that would guarantee soldiers receive full benefit of bonuses.

"Hard as it may be to believe, the Department of Defense has been denying injured servicemen and women the bonuses that they qualified for," Altmire said at a press conference last month for H.R. 3793.