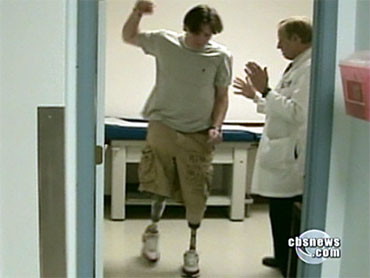 Casey Owens wasn't expected to live after he lost both legs in Iraq. But he made it out of a military vehicle alive and to Bethesda Naval Hospital where CBS News national security correspondent David Martin first met him in October of 2004.

"I don't remember anything, but I know that it was a mine," Owens said.

Everyone would agree the U.S. government owes Casey Owens the best possible medical care. No one who hears his story could say he got it.

He said that to the latest doctor he turned to in his desperate search for the help he was not getting from the Veterans Administration.

"Dealing with the VA and being held up and not getting the care that I feel I wanted or treatments that I see fit," Owens said. "That's a very discouraging thing for me because I did my part and their part is to help heal us and they failed me."

All he ever wanted to be was a Marine. Even after he was wounded he donned his dress blues for President Bush's second inaugural. But the amputation on his right leg kept failing and the VA told him he would need a fourth operation to repair the stump.

"What they offered me was the same surgery that had failed three times before," Owens said.

Each surgery meant more of his right leg had to be amputated.

"I didn't have much more of my leg to give," Owens said.

He wanted a different procedure.

"So I did research on my own and found the doctor which took six months of approval to get," Owens recalled.

His mother says he spent six months with a raw stump just.

Finally he got the operation and, he says, a personal apology from President Bush for the delay. He was up on two legs but still searching for treatment of the wound you can't see: the brain injury.

"I was having a hard time getting my thoughts together and focusing and getting really irritable," Owens said.

But that's not what the VA told him.

"I've gone to the VA and complained about certain symptoms but it's usually just shrugged off as sinus headaches or migraines or stress," Owens said.

Once again on his own and with money from private charities, he came to a small medical center outside New Orleans where Dr. Paul Harch uses pressurized oxygen chambers to treat brain-injured vets.

"The theory is that a pulse of a high level of oxygen can energize damaged cells and stimulate tissue growth and improvement of neurologic function," Dr. Harch said.

It's an old-fashioned treatment originally developed for deep sea divers suffering from the bends. But Harch is having encouraging results with the small number of vets he's treated so far.

"Cognitively they're improving," Dr. Harch said. "Their quality of life is improving. They feel better.

"I don't feel so scatterbrained, able to put, collect my thoughts a lot easier, not get lost in the middle of a sentence like I had been," he said.

Casey now plans to start college in the fall.

But he had to do it on his own.

Congress at odds over how to avoid debt default