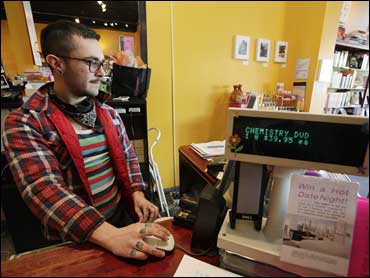 And in Texas, state lawyers are fighting to preserve the "pole tax," a $5 cover charge on strip clubs that's being challenged by business owners.

But even with serious constitutional problems, lawmakers have not stopped trying to capitalize on the fact that sex sells, especially when facing big budget shortfalls and weary voters who are not likely to stomach an across-the-board tax hike.

"Why do they do it? Because they can," said Phyllis Heppenstall of Peekay Inc., which operates adult stores in Washington and California. "It makes them look good to their constituents. Or at least they think it does."

It's easy to see why targeting sex businesses seems like a good move politically. Singling out taboo behavior for extra taxation is part of the political drive that has led to "sin" taxes on tobacco and alcohol.

On purely economic grounds, a pornography tax is a decent idea because consumer demand would probably remain strong, University of Texas economist Daniel Hamermesh said. Some believe adult entertainment to be a multibillion dollar industry, although the size is difficult to gage.

"In that sense, it's not a bad way to raise money," Hamermesh said. "You're not going to discourage people. But if you want to raise money, why not?"

But sex-themed taxes have still attracted opposition. Even some social conservatives have resisted, arguing that the government legitimizes naughty behavior by profiting from it.

Adult businesses, of course, also have pushed back. Their trump card has been the First Amendment, which protects entertainment products from taxes based solely on their content.

Some restrictions on adult entertainment are generally allowed, such as zoning laws that regulate where a strip club can operate. That's because such laws are aimed at secondary factors, such as a business' effect on surrounding property values, UCLA law professor Eugene Volokh said.

But tying a tax strictly to a product's content is different, Volokh said - you can't tax Playboy, for instance, unless you also hit other magazines like Newsweek and National Geographic.

Officials in Texas have run into that problem with the state's "pole tax," the special entry fee for strip clubs that serve alcohol.

The Texas Legislature approved the fee in 2007, hoping to spend the money on sexual assault and health insurance programs, but a state judge tossed out the fee as an unconstitutional infringement on free speech. State lawyers have appealed the decision.

New York state could avoid free speech problems with Paterson's proposed tax on Internet downloads because it would treat all entertainment products the same, regardless of content.

Analysts said the tax could have netted the state about $17.8 million for the upcoming two-year budget.

But after heavy criticism from editorialists and sex-shop customers alike, Democratic Rep. Mark Miloscia, who sponsored the bill, now acknowledges it will fail this year.

"The adult industry is this big mystery," Denk said. "They think it's the Larry Flynts of the world and very deep pockets and a multibillion-dollar industry, when in fact it's small businesses."