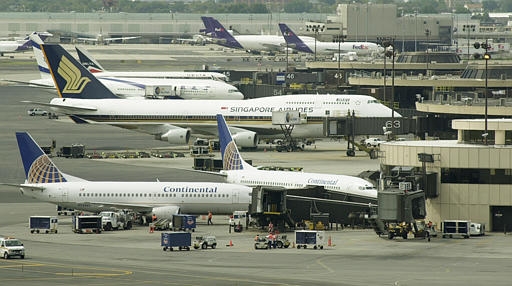 The airport with the worst record for delays in the nation is Newark Liberty International in New Jersey, according to data compiled for the Wall Street Journal by the Transportation Department's Bureau of Transportation Statistics.

And overall, the number of late departures and arrivals continues to rise, despite the fact that high oil prices prompted airlines to cut the number of flights by nearly five percent across the country, reports CBS News Travel Editor Peter Greenberg.

Newark Liberty may only be the 14th busiest airport in the U.S., Greenberg noted on "The Early Show," ., but 40 of the 100 most-delayed flights go in or out of there - something frequent fliers using the facility say they know all too well.

"I believe that sounds right on the money!" one said with a laugh. "I thought it would be higher, actually."

Other top offenders: Southwest Flight 50, from Dallas Love Field to Kansas City, which is delayed 47 percent of the time. Continental Flight 2248, from Memphis to Newark, and Delta (Comair) Flight 6480, from Chicago O'Hare to Cincinnati. All have average delays of more than an hour.

Why all the delays?

It's not the weather, Greenberg says. Even with clear skies, there are too many planes flying at peak times, and air traffic control has to slow down the flow.

The real culprit is --.scheduling. If you have a runway at a major airport that can handle 20 takeoffs and landings at 5 p.m., but the carriers have been allowed to schedule 34 departures, it's not a surprise that most of those flights are not departing on time. And as long as airlines are allowed to publish unrealistic schedules, it is inevitable that there will be delays.

Compounding the problem is that small, regional jets that take up as much gate space and separation in the sky as a Boeing 747.

And, experienced travelers may know some ways around the delays, but when it comes to flying, nothing is foolproof.

Your best bet, says Greenberg: picking the very first flight of the day. Also, choosing alternate departure and arrival airports, such as Oakland instead of San Francisco, Islip in New York instead of JFK or LaGuardia, Providence instead of Boston and - Greenberg's favorite alternate airport - Milwaukee instead of Chicago.

To see the ten worst airports, go to Page 2.

The airports with the highest number of frequently delayed flights, in order of likeliness of having to wait: