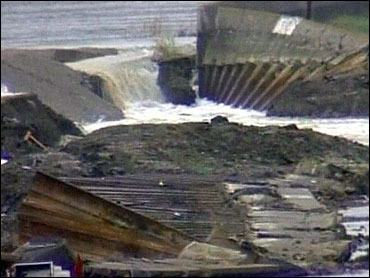 Water poured over a patched levee Friday, cascading into one of the city's lowest-lying neighborhoods and heightening fears that Hurricane Rita would re-flood this devastated city.

Dozens of blocks in a New Orleans neighborhood are now under waist-deep floodwater. The water is pouring over a patched levee, in the form of a waterfall at least 30 feet wide.

"Our worst fears came true," said Barry Guidry of the Georgia National Guard. "The levee will breach if we keep on the path we are on right now, which will fill the area that was flooded earlier."

Dozens of blocks in the Ninth Ward were under water as a waterfall at least 30 feet wide poured over and through a dike that had been used to patch breaks in the Industrial Canal levee. On the street that runs parallel to the canal, the water ran waist-deep and was rising fast. Guidry said water was rising about three inches a minute.

The impoverished neighborhood was one of the areas of the city hit hardest by Katrina's floodwaters and finally had been pumped dry before Hurricane Rita struck.

Mitch Frazier, a spokesman for the Army Corps of Engineers, said water is rushing over part of the levee that previously was breached.

Due to constant warnings from public officials and media, there are only about 500 people left in New Orleans — though many more are in outlying areas — reports CBS News correspondent Sharyn Alfonsi for The Early Show.

Those staying put are very concerned (video)
, but most concerned are the emergency workers.

As for those who refuse to leave, Gov. Kathleen Blanco advised: "Perhaps they should write their Social Security numbers on their arms with indelible ink."

As many as 500,000 people in southwestern Louisiana, many of them already displaced by Hurricane Katrina, were told to evacuate and many jammed roads north to escape.

Glynn Stevenson, who swam out of his New Orleans house with belongings taped to his body, had just gotten settled into a trailer provided by the Federal Emergency Management Authority when the call came for him to uproot again.

"It's nothing to get mad about," he said. "Just keep a cool attitude and help your brothers."

Despite warnings, many of the few hundred hold-outs in New Orleans aren't ready to leave. Some tell CBS News that they'd rather stay at home than go to a shelter and have to be moved out again.

Another concern is the storm surge accompanying Rita, which could send water rising as much as 4 feet above high tide. Already Friday morning, a steady 20 mph wind, with gusts to 35 mph, was blowing, along with steady rains.

Due to uncertain weather conditions from Hurricane Rita, the recovery of bodies was suspended but previous discoveries pushed the death toll from Hurricane Katrina to 841 in Louisiana, and at least 1,078 across the Gulf Coast.

And, as Alfonsi reports, some city engineers say it looks like the levees are already leaking. Even a glancing blow to New Orleans

The storm took a sharper-than-expected turn to the right on Thursday, setting it on a course that could spare Houston and nearby Galveston a direct hit. But that raised the risk that the hurricane could strike much closer to New Orleans.

"Right now, it's a wait-and-see and hope-for-the-best," Army Corps of Engineers spokesman Mitch Frazier said a few hours before the National Guard cut off all access into New Orleans.

The forecast brought renewed urgency to efforts to shore up levees with sandbags and bring in more portable pumps.

Officials have been working around the clock to patch levees, and a steel curtain has been erected on at least one levee, hoping to withstand the sort of heavy rain that hit the city Friday morning, CBS News correspondent Susan Roberts

"Up until Rita, everyone was pretty upbeat," New Orleans Mayor Ray Nagin said during a blustery outdoor news conference amid intermittent rain. "Now that Rita has come into the picture, it's been difficult."

Chad Rachel, a civil engineer with the Army corps, said the water level in the canal was rising and "localized seepage" was inevitable.

"Any drop of rain that falls is going to stay," he said.

What hopefully will be different about Hurricane Rita, CBS News correspondent John Roberts reports, is the federal response. FEMA says it has 45 tractor-trailer loads of ice, food and water pre-positioned as the Gulf Coast waits for Rita to strike.

"We've got buses running continuously to get residents out. We're trying to learn from other areas, not to repeat their mistake," said Cindy Murphy, a manager at the police bureau in Lake Charles.

Coast Guard Vice Adm. Thad Allen said three days worth of supplies, including food and water, for 500,000 people are ready and waiting around Louisiana, if needed after Rita.

Hospitals around the state were shutting down, too. Jimmy Guidry, Louisiana's state health officer, said patients from hospitals in Lake Charles and Cameron were being evacuated, some north to Alexandria, La., and others to hospitals as far away as Oklahoma.

Katrina's death toll in Louisiana rose to 832 on Thursday, pushing the body count to at least 1,069 across the Gulf Coast. But workers under contract to collect bodies were taken off the streets of New Orleans because of the approaching storm.

A mandatory evacuation order was in effect for homes on the eastern bank of the Mississippi, and police said people in the city's Algiers section on the other side of the river would be wise to get out, too. But thousands stayed put.

A traffic jam of evacuees extended from Houston and other Texas cities well into Louisiana, with Interstate 10 congested across southern Louisiana.

Janell LeDoux and her husband spent six hours on the freeway and covered just 80 miles from their home near Lake Charles east to Lafayette. And they were only halfway to her sister's house in eastern Louisiana.

"I just hope we have something left to go home to. Not like in New Orleans," she said. Four gas stations in Lafayette had run dry. A fifth station had only premium.

It's been nearly a month since Hurricane Katrina wrecked the lives of thousands of people. But many of the storm's survivors are finding it harder to cope today than immediately after the storm.
"I'm losing my mind," he says.

"People are recognizing this isn't like a tornado where things will be rebuilt and life will get back. Life will not be the same. So there is a despair and a depression that is setting in" said Dr. Dorothy Dickson-Rishel, a psychologist at Memorial Hospital at Gulfport.