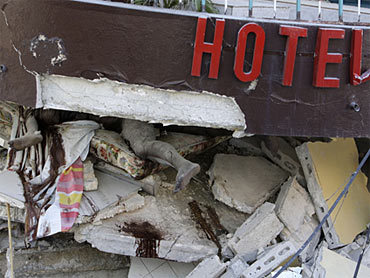 Richard Nixon will forever be remembered for Watergate, one of the biggest scandals in American political history. But a former member of his staff believes the current administration could take President Nixon's place in the annals of infamy.

He visited The Early Show to talk about it. Dean is one of the main whistle-blowers credited with bringing the Nixon presidency to its end. He famously told the Congressional hearing that the Watergate cover-up was a "cancer growing on the presidency."

With his book, he tells co-anchor Harry Smith, he is not writing an "encyclopedia of the abuses of secrecy of this administration. I'm trying to make a prima facie case that this is a serious problem, and I'm selecting evidence that I think makes the case. From what I'm told, I made the case."

Dean notes his argument is not a partisan issue in the traditional Republican and Democratic sense.

"I don't really carry that kind of baggage around anymore," he says. "It certainly is a partisan issue in the sense that it's a good government issue - good/bad government issue. And I'm making the case that it's bad government to use secrecy as obsessively as this administration is. We've been there. We've done that. We've found it doesn't work. We find it inherent with problems. And whether they're Democrats or Republicans, they should pay attention to this issue."

One of the main problems he has with the current administration is the tactics were used to justify military action in Iraq. He says, "The American people weren't told the facts. They were misled about the facts about the connection between weapons of mass destruction and the ties to Iraq and al Qaeda, and this was a deception."

Though the Bush administration may argue that those were the facts as they knew them at the time, Dean says the full story was not told.

"When he went to Congress and actually got a resolution, he cracked an unusual deal with the Congress. The Congress is very jealous of its war powers. It delegated to Bush unusual powers that he wouldn't have to come back when he actually went. Within 48 hours of going, come back and give us a determination of two things. One, that diplomatic means won't solve the weapons of mass destruction. And secondly, that there's a tie to al Qaeda and it's consistent with the general war on terrorism. He gave a determination. It's a bogus determination."

Smith presented Dean with the idea that the Bush administration's attitude has been, "We kind of know what the deal is here. This is how we're going to run our ship." And there seems to be a large group within the population who says, "We like it this way. This is the government we asked for."

Does Dean disagree with that notion?

He responds, "I don't think they know the government they're getting. Take the environmental area. I selected issues there that are truly fatal to the American people because of the favors that are being done for big contributors. They're really quite stark. And what I selected were a handful of examples that are truly fatal to Americans. And whether they be Bush supporters or Bush opponents, this is pretty serious business when you're running secret programs that have these kinds of impacts."