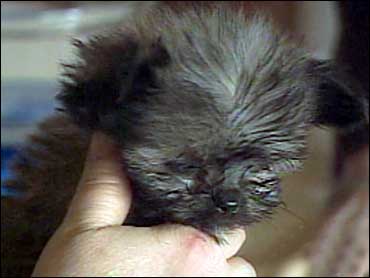 In a country that has had too much recent bad news about dogs - what with Princess Anne's terriers killing the Queen's corgi and biting a royal housemaid - the media in Britain is happily focused on a different kind of puppy story. And it's no tall tale,CBS News Correspondent Elizabeth Palmer reports for The Early Show.

Sky News reported, it "measures just three inches tall at the shoulder, is four inches long and weighs only a little over a pound. It stopped growing at four weeks and is on course to be the world's smallest dog."

Tiny Tim is one of four puppies born earlier this winter to Shi Tzu father Patches and Chihuahua mother Sparkles. And he wasn't even the runt of the litter, says his owner Mandy Marks.

"When they were first born, he was the same size as the rest of them," Marks says, "There was no reason to believe that he was going to be anything other than the same size as any other puppy we've ever had."

But six weeks later, he was still only half as big as his siblings and he's hardly grown since.

At 10 weeks, Tiny Tim isn't really even pint-sized. He barely weighs over a pound as he stick his tiny head over the bowl on the kitchen scale.

After the local newspaper printed Tiny Tim's picture earlier this month, his fame spread beyond the tiny Devon village where he lives.

And suddenly, all of Britain wanted a look at him. But could this very minor celebrity also be a major record breaker?

So could Tiny Tim break the record?

Lacey says, "I understand it's about 10 weeks and we usually measure the dogs at least a year old, so we'd have to wait."

At nine inches long, Tiny Tim has already lost out to Florida's Pinocchio, as smallest dog. But at three inches tall, he could still be named the shortest dog in the world if he doesn't grow. But judging by the way he attacks his lunch - one tablespoonful of dog food, well mashed - he's a long shot.