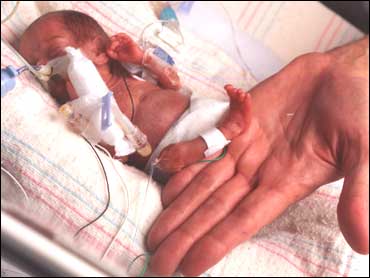 A little girl who's believed to be the smallest surviving baby in the world has been sent home from the hospital.

Rumaisa Rahman was born in September weighing only 8.6 ounces. That's about the size of a cellphone.

She was discharged on Tuesday from Loyola University Medical Center in the Chicago suburb of Maywood. She currently weighs 5.5 pounds and is more than 16 inches long.

Her fraternal twin sister, Hiba, was discharged on January 9. Hiba was only one pound, four ounces at birth but now weighs in at 8.5 pounds.

The babies' 23-year-old mother developed pre-eclampsia, a disorder characterized by high blood pressure, during pregnancy. The condition endangered Rumaisa and her mother, prompting a C-section at 26 weeks. Normal gestation is 40 weeks.

The twins were placed on ventilators for a few weeks and fed intravenously for a week or two until nurses could give them breast milk through feeding tubes. They were able to start drinking from bottles after about 10 weeks.

Madeline Mann, the previous record holder as smallest known surviving premature baby, returned to Loyola Hospital last year for a celebration. Now 15, she was described as a lively honor student, though small for her age, at 4 feet and 7 inches.

According to the hospital, more than 1,700 newborns weighing less than 2 pounds have been cared for there in the past 20 years.

Stephen Davidow, a hospital spokesman, said a routine delivery costs about $6,000, while caring for a premature baby costs about $5,000 a day. Rumaisa is covered by Medicaid, hospital officials said.