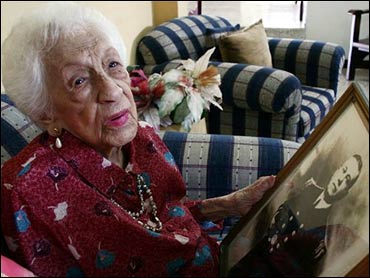 Maria Esther de Capovilla, the oldest person on Earth, according to Guinness World Records, has died at 116 years of age, her granddaughter said.

Catherine Capovilla, 46, a property manager and real estate agent in Miami, said Capovilla died Sunday at 3 a.m. local time (0800 GMT) in a hospital in the coastal city of Guayaquil two days after coming down with pneumonia. Her funeral was planned for Monday.

"Guinness World Records will have to make an official announcement from London," he said. "For all practical purposes, the next oldest person is going to be presumed to be Elizabeth Bolden. She is 116, but she was born 11 months after Capovilla."

Capovilla was confirmed as the oldest living person on Dec. 9, 2005, after her family sent details of her birth and marriage certificates to the British-based publisher. Emiliano Mercado Del Toro, of Puerto Rico, retains the title as oldest man. He turned 115 last Monday.

Three of Capovilla's five children - Irma, Hilda, and son Anibal - are still alive, along with 12 grandchildren, 20 great-grandchildren and two great-great grandchildren, the last of whom was born in February 2003, Catherine Capovilla told The Associated Press in a telephone interview.

In her youth, Capovilla liked to embroider, paint, play piano and dance the waltz at parties, the family said. She also visited a nearby plantation, where she would drink fresh milk from donkeys as well as cows.

She always ate three meals a day and never smoked or drank hard liquor - "Only a small cup of wine with lunch and nothing more," Irma told AP last December.

For the past 20 years, Capovilla had lived with elder daughter, Hilda, and son-in-law, Martin.

"She was in good shape until she had a bout of pneumonia and she died unexpectedly. Her family was expecting to have a 117th birthday party," said Young, speaking from Atlanta. "They had recently said that she was in good shape."