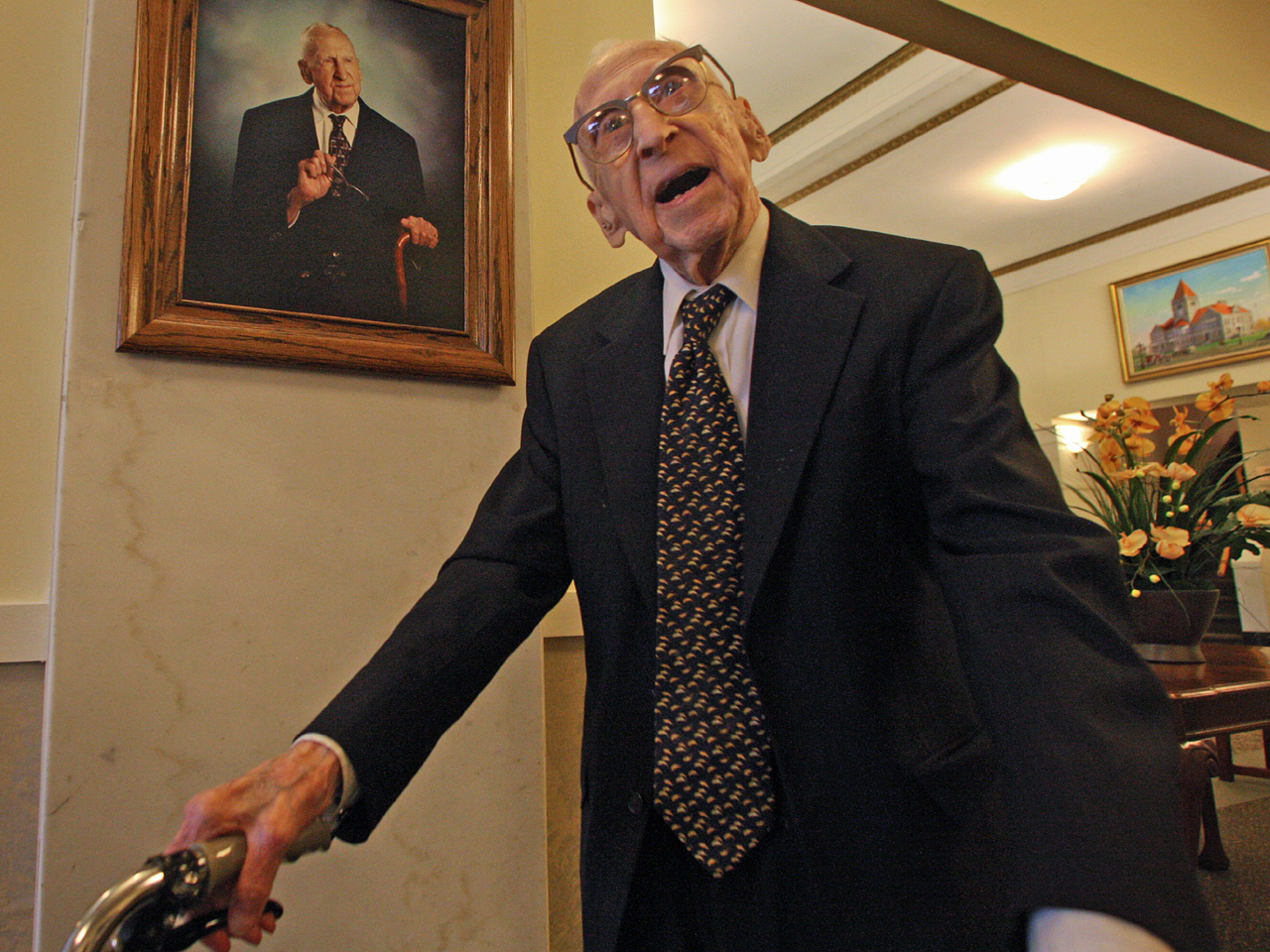 GREAT FALLS, Montana - Walter Breuning's earliest memories stretched back 111 years, before home entertainment came with a twist of the radio dial. They were of his grandfather's tales of killing Southerners in the U.S. Civil War.

Breuning was 3 and horrified: "I thought that was a hell of a thing to say."

But the stories stuck, becoming the first building blocks into what would develop into a deceptively simple philosophy that Breuning, the world's oldest man at 114 before he died Thursday, credited to his longevity.

Here's the world's oldest man's secret to a long life:

Embrace change, even when the change slaps you in the face. ("Every change is good.")

Work as long as you can ("That money's going to come in handy.")

Help others ("The more you do for others, the better shape you're in.")

Then there's the hardest part. It's a lesson Breuning said he learned from his grandfather: Accept death.

"We're going to die. Some people are scared of dying. Never be afraid to die. Because you're born to die," he said.

Breuning died of natural causes in a Great Falls hospital where he had been a patient for much of April with an undisclosed illness, said Stacia Kirby, spokeswoman for the Rainbow Senior Living retirement home where Breuning lived.

He was the oldest man in the world and the second-oldest person, according to the Los Angeles-based Gerontology Research Group. Besse Cooper of Monroe, Georgia -- born 26 days earlier -- is the world's oldest person.

In an interview with The Associated Press at his home in the Rainbow Retirement Community in Great Falls last October, Breuning recounted the past century -- and what its revelations and advances meant to him -- with the wit and plain-spokenness that defined him. His life story is, in a way, a slice of the story of America itself over more than a century.

At the beginning of the new century -- that's the 20th century -- Bruening moved with his family from Melrose, Minnesota, to De Smet, South Dakota, where his father had taken a job as an engineer.

That first decade of the 1900s was literally a dark age for his family. They had no electricity or running water. A bath for young Walter would require his mother to fetch water from the well outside and heat it on the coal-burning stove. When they wanted to get around, they had three options: train, horse and foot.

His parents split up and Breuning moved back to Minnesota in 1912. The following year, the teenager got a low-level job with the Great Northern Railway in Melrose.

CBS News correspondent Steve Hartman first reported on Walter Breuning in 2009, when he was 112 years old.

That was the beginning of a 50-year career on the railroad. He was a clerk for most of that time, working seven days a week.

In 1918, his boss was promoted to a position in Great Falls and he asked Breuning to come along.

There wasn't a lot keeping Breuning in Minnesota. His mother had died the year before at age 46 and his father died in 1915 at age 50. The Montana job came with a nice raise -- $90 a month for working seven days a week, "a lot of money at that time," he said.

Breuning, young and alone, was overwhelmed at first. Great Falls was a bustling town of 25,000 with hundreds of people coming and going every day on trains that arrived at all hours.

"You go down to the depot and there'd be 500 people out there all climbing into four trains going in four directions," he said.

The 19th Amendment gave women the right to vote in 1919 and America was riding a postwar wave into the Roaring `20s.

It was a secondhand Ford and cost just $150. Breuning remembered driving around town and spooking the horses that still crowded the dirt streets.

"We had more damn runaways back in those days," Breuning said. "Horses are just scared of cars."

The year may have started well, but it went downhill fast. Drought struck. The price of hay skyrocketed and farmers had to sell their cattle.

The railroad started laying off people. Breuning had some seniority, so rather than losing his job, he was transferred to Butte. It was there he met his future wife, Agnes.

Hartman visited with Bruening again when he turned 113.

Agnes Twokey worked for the railroad as a telegrapher. She and Breuning worked the same shift in the office, and they got along well. Their friendship turned into a two-year courtship, and then they got married and returned to Great Falls.

Things were looking up for Breuning, Montana and America. Great Falls gave Montana its first licensed radio station in 1922. The following year, Jack Dempsey and Tommy Gibbons fought for the world heavyweight championship east of Great Falls in Shelby.

Breuning was optimistic. He and his wife bought property for $15 and planned to build a house.

Then it all went off the tracks. The Great Depression struck.

"Everybody got laid off in the '30s," Breuning said. "Nobody had any money at all."

People began to arrive in Great Falls searching for work. He recalled transplants from North Dakota telling tales of desperate families pulling weeds from the ground and cooking them up for food.

Breuning's seniority paid off again -- he held onto his job. But he and his wife never built their house. They sold the lot for $25, making a tidy $10 profit. It turned out to be the only time Breuning ever owned property -- he was renter for the rest of his life.

Despite the hard times of the decade, he said what he considered America's greatest achievement came in 1935, when President Franklin Roosevelt signed Social Security into law as part of his New Deal.

"I think when Roosevelt created Social Security, he probably did the best thing for people," Breuning said. "You hear so much about throwing Social Security out. Don't look for it. Hang on to your hat. It'll never go away."

World War II lifted the nation out of its economic slump. Industry went into overdrive to support the war. With the men headed overseas to fight, the women took their places in factories.

Montana's Jeannette Rankin, the first woman elected to Congress, was the sole vote against the U.S. entry into the war.

By that time, Breuning was in his 40s and too old to be drafted. So he kept working on the railroad.

The man who otherwise preached kindness and service to others acknowledged that he had mixed feelings about the war and the Nazis. He expressed some sympathy toward Hitler.

Breuning stuck up for Truman, saying there probably would have been a lot more people killed had Truman not made the decision to bomb the Japanese.

"I think he did pretty dang good," Breuning said. "But you know, all presidents done something good. Well, most of them. Except that last one."

"He got us into war. We can't get out of war now," he said. "I voted for him. But that's about all. His father was a pretty good president, not too bad. The kid had too much power. He got himself wrapped up and that's it."

The 1950s brought rock-and-roll, put the U.S. in the middle of the Korean War and kicked off the space race with the USSR's launch of Sputnik. The world was introduced to Elvis Presley, Fidel Castro and Sen. Joseph McCarthy.

For Walter Breuning, the 1950s was marked by the death of his wife. Agnes died in 1957 after 35 years of marriage. The couple didn't have any children.

More than 50 years later, Breuning kept his feelings on his marriage and Agnes' death guarded.

"We got along very good," was about all he'd say. "She wouldn't like to spend money, I'll tell you that."

Breuning never remarried. "Thought about it. That's about it."

He did was what he always did. He kept working.

Work was a constant in Breuning's life, what he did to get through the hard times and what he used to keep his mind active. One of the worst things a person can do is retire young, Breuning said.

"Don't retire until you're darn sure that you can't work anymore. Keep on working as long as you can work and you'll find that it's good for you," he added.

The same year the Beatles released their first album, Breuning decided it was time for him to retire from the railroad at age 67. It was 1963 and he had put in 50 years as a railroad worker.

But he stuck by his philosophy and kept working. He became the manager and secretary for the local chapter of the Shriners, a position he held until he was 99.

His beloved railroad underwent many changes soon after he left. In 1970 it merged with other railroad companies to become the Burlington Northern Railroad.

His fellow clerks began to feel the effects of technology. In the 1970s, computers started changing industries and the need for manpower. At the railroad, men and women were laid off at depots and freight offices. Superintendents and clerks like Breuning were given their walking papers.

But even with so many of his former co-workers out of jobs, Breuning was adamant that the rise of the computer was good for the railroad industry and the world.

"I think every change that we've ever made, ever since I was a child -- 100 years -- every change has been good for the people," Breuning said. "My God, we used to have to write with pen and ink, you know, (for) everything. When the machines came, it just made life so much easier."

Breuning had lived in a studio apartment in the Rainbow Senior Living retirement center since 1980.

He would spent his days in an armchair wearing a dark suit and tie, sitting near a framed Guinness certificate proclaiming him the world's oldest man.

He would eat breakfast and lunch and then retire to his room in the early afternoon. He'd visit the doctor just twice a year for checkups and the only medication he would take was aspirin, Rainbow executive director Tina Bundtrock said.

His good health was due to his strict diet of two meals a day, Breuning said.

"How many people in this country say that they can't take the weight off?" he said. "I tell these people, I says get on a diet and stay on it. You'll find that you're in much better shape, feel good."

Breuning talked current affairs with the other residentsin the Rainbow. One of his main causes was to end the wars in Iraq and Afghanistan.

"War never cured anything. Look at the North and South right today. They're still fighting over the damn war. They'll never get over that," he said.

Along with debating others about the fate of the nation, Breuning also spent time a lot of time reflecting. Sitting in his armchair, he would reach back across the century and lose himself in a flood of memories that began with his grandfather's Civil War stories.

He didn't regret anything, and he implored others to follow his philosophy.

"Everybody says your mind is the most important thing about your body. Your mind and your body. You keep both busy, and by God you'll be here a long time," he said.