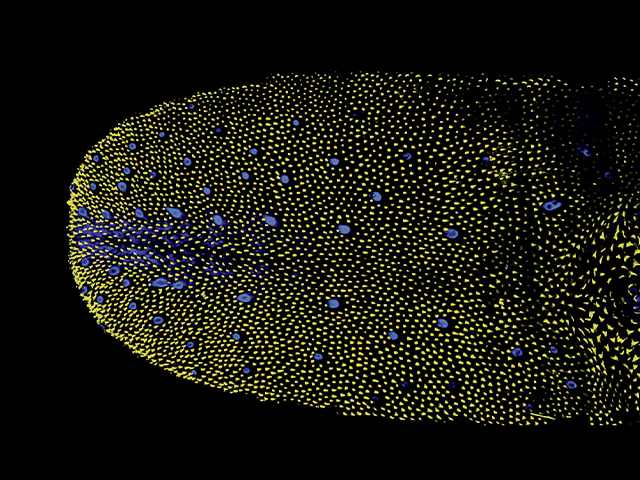 The human tongue contains more than 2,000 taste buds, which can distinguish between the five main tastes: salty, sweet, sour, bitter and umami. However, understanding the relationship between taste buds and taste cells has always been difficult because the cells within each bud are affected by a wide array of taste molecules and stimulants.

Now for the first time, an international team of researchers has imaged the activation of single taste cells in a taste bud on the tongue. They did it in a live mouse using specially designed microscopes and fluorescent probes.

To capture the images, the team shined a bright infrared laser on the tongue of an anesthetized mouse. Different parts of the tongue and the flavor molecules fluoresced, allowing researchers to see what happened when these molecules were stimulated by different tastes.

The new research was published in the journal Nature Scientific Reports.

With the new imaging tool, researchers discovered that each taste bud contains taste cells for different tastes and that the cells respond not only to molecules contacting the surface of the tongue, but also to molecules in the blood.

"We were surprised by the close association between taste cells and blood vessels around them," said assistant professor Myunghwan Choi, from the Sungkyunkwan University in South Korea. "We think that tasting might be more complex than we expected, and involve an interaction between the food taken orally and blood composition."

Lee told CBS News, this means that the taste cells can acquire a taste such as sweet from sources apart from just oral intakes. He concluded: "It might be possible to influence the function of sweet taste cells via the blood stream."

The work complements studies by other research groups that identified areas in the brain associated with taste.

The team now hopes to develop a way to monitor the brain while imaging the tongue to track how the cellular signals are processed and transmitted to the nerves that are connected to the brain.

"By understanding how individual taste cells function, it helps us develop a clearer overview of the taste logic," Lee said. "This can lead to the possibility of conditioning taste cell that can help in dietary disorders."