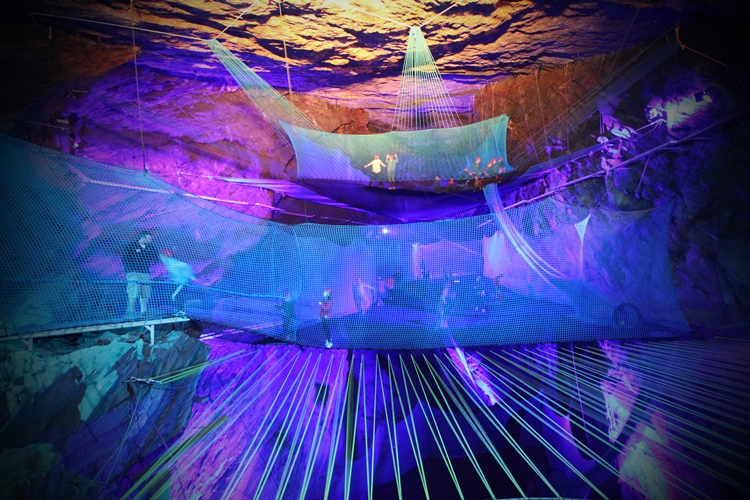 Snowdonia, WALES -- The "oooohs" and "aaahhhs" start pretty much from the time kids walk the last turn down the abandoned mineshaft into the belly of a 200-foot cavern in a mountain in Wales. It's not the size of the 176-year old mine that impresses these middle and high school students - it's the massive trampolines suspended from the mine walls that has them jumping.

"Awesome," says wide-eyed elementary student Elai Hughes. She is one of about 30 local children and teenagers getting a preview of Bounce Below, a new underground series of trampolines set up in a former slate mine, opening 4 July weekend.

The owners of Bounce Below say their more than 10,000-square-feet worth of bouncy nets make up the world's largest underground trampoline. There are three levels on which to jump - the highest trampoline is 180 feet up from the cavern bottom - and they are all connected by vertigo-inducing slides, chutes and ladders.

"It is scary at first, but then it's really cool," elementary school student Cian Williams says about the 60-foot slide that has visitors jumping into it looking like ground meat passing through sausage casing.

Yes, the neighborhood birthday party bouncy trampoline castle has grown up and gone all extreme sport. Visitors to the underground park have to wear helmets and orange overalls for safety reasons. Each trampoline level is surrounded with nine-foot mesh to keep visitors from bouncing out. Children must be at least 12 years old to bounce alone. After a safety briefing and a short train ride into the mountainside, ticketed "bouncers" get to spend about an hour jumping, sliding, running and climbing in the cavern. The trampoline heights, views and drop slides can be intimidating - but they're also fun, according to the project's developers.

"We are not trying to make this an amusement ride," jokes Sean Taylor, Commercial Director of Bounce Below. "As long as people are coming and they are safe and they have a great time...we've made this as safe as we possibly can."

Taylor, who also operates a high-speed zip line attraction at the same location, says they got the subterranean trampoline idea from an outdoor trampoline project in the woods of France. Bounce Below says it took workers five months to clear 50 tons of stone from the slate mine cavern; then a team from France installed the series of cables and bolts into the cave walls to support the bouncy nets. Taylor wants the project to bring more tourists to north Wales, an area that still suffers from unemployment since the mines shut down. The local community seems to support the investment project.

"When I first heard about this, I wasn't so sure. It's a beautiful cave - and they put a trampoline in it?" local resident Aaron Davies says during his visit. He's broken a sweat and is catching his breath after climbing a 60-foot spiral chute. But he says he's hooked on Bounce Below.

"We've got thousands of these caves, and this is such a new way to see them and experience them and jump around and have a lot of fun," he says.