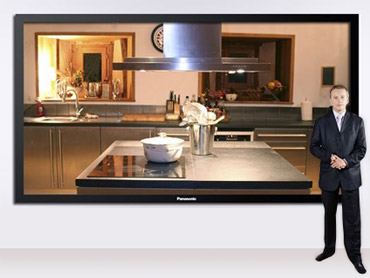 (LAS VEGAS) -- It's the biggest day of the year for techies: the annual Consumer Electronics Show - known as the "Super Bowl of Technology," opens in Las Vegas.

Tech expert and "Early Show" contributor Katie Linendoll -- who's also a paid spokesperson for Polaroid and Lincoln cars - says one offering in particular among the 20,000 or so being touted at the show is impossible to miss -- the biggest TV anywhere - the Panasonic 152 inch 3D Plasma TV. It has a price to match its size - a cool $500,000. It's available now.

iGrill
Wireless cooking thermometer for iPod, iPad and iPod Touch. They use Bluetooth to watch the temperature of the meat you cook. You download their app and it also has a timer and cooking recipes on it as well. Available now on igrillinc.com for $99.99

Withings BPM
This blood pressure monitor communicates with your device to help you keep your BPM under control. It will sell for $129 and Will debut Feb 2011.

BodyMedia FIT Arm Band
A fitness arm band that is connected to the app on your TV. It tracks your calories burned, foot steps taken and heart rate. You can track your stats and those of your families. Available in the spring for $249

BlackBerry Playbook
Designed for both work and play. BB Playbook is less than half an inch thick and weighs less than 1 pound. Features a 7" high res touch screen display. Features dual HD cameras for video capture and conference as well as HDMI out port. Expected debut Spring 2011, price not available.

Angry Birds Knock On Wood
Board-like game with miniature figurines. This is just like the popular app "Angry Birds". The product slings "angry" birds into wood blocks. For ages 5+ up. Retail price is 14.99 debuts in May of 2011.

Skullcandy MP3 Belt
It's a good looking belt and it's also a MP3 player. It's a regular sized belt buckle with volume controls. It will retail at $150 with an expected debut April 2011

nPower PEG
A personal product charger that uses kinetic energy to charge your electronic devices. You can run, walk, bike or even attach it to a backpack to add a boost of power to your devices. This retails for $159 and is available now.

Casio TRYX
Camera with a 3" LCD touch screen that has a 360-degree rotatable frame. Less than one inch thick. Shoots 12 MPs and also allows user to shoot full HD video. Retails for $249.99 and will be available April 2011. Comes in silver and black.

Whee Me
It's like a rumba for your back - it's a massing "bot" that knows when to stop. Soon to be available this Summer for $70.