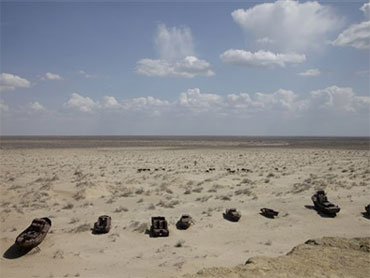 U.N. Secretary-General Ban Ki-moon on Sunday called the drying up of the Aral Sea one of the planet's most shocking disasters and urged Central Asian leaders to step up efforts to solve the problem.

Once the world's fourth-largest lake, the sea has shrunk by 90 percent since the rivers that feed it were largely diverted in a Soviet project to boost cotton production in the arid region.

The shrunken sea has ruined the once-robust fishing economy and left fishing trawlers stranded in sandy wastelands, leaning over as if they dropped from the air. The sea's evaporation has left layers of highly salted sand, which winds can carry as far away as Scandinavia and Japan, and which plague local people with health troubles.

Ban toured the sea by helicopter as part of a visit to the five countries of former Soviet Central Asia. His trip included a touchdown in Muynak, Uzbekistan, a town once on the shore where a pier stretches eerily over gray desert and camels stand near the hulks of stranded ships.

"On the pier, I wasn't seeing anything, I could see only a graveyard of ships," Ban told reporters after arriving in Nukus, the nearest sizable city and capital of the autonomous Karakalpak region.

"It is clearly one of the worst disasters, environmental disasters of the world. I was so shocked," he said.

The Aral Sea catastrophe is one of Ban's top concerns on his six-day trip through the region and he is calling on the countries' leaders to set aside rivalries to cooperate on repairing some of the damage.

"I urge all the leaders ... to sit down together and try to find the solutions," he said, promising United Nations support.

However, cooperation is hampered by disagreements over who has rights to scarce water and how it should be used.

In a presentation to Ban before his flyover, Uzbek officials complained that dam projects in Tajikistan will severely reduce the amount of water flowing into Uzbekistan. Impoverished Tajikistan sees the hydroelectric projects as potential key revenue earners.

Competition for water could become increasingly heated as global warming and rising populations further reduce the amount of water available per capita.

Water problems also could brew further dissatisfaction among civilians already troubled by poverty and repressive governments; some observers fear that could feed growing Islamist sentiment in the region.

That is likely to be an especially tense issue when he meets Monday with Uzbek President Islam Karimov, who has led the country since the 1991 Soviet collapse and imposed severe pressure on opposition and civil rights activists.

The meeting comes less than two weeks after the U.N. Human Rights Committee issued a report criticizing Uzbekistan, including calling for fuller investigation of the brutal suppression of a 2005 uprising in the city of Andijan. Opposition and rights groups claim that hundreds were killed, but authorities insist the reports are exaggerated and angrily reject any criticism.