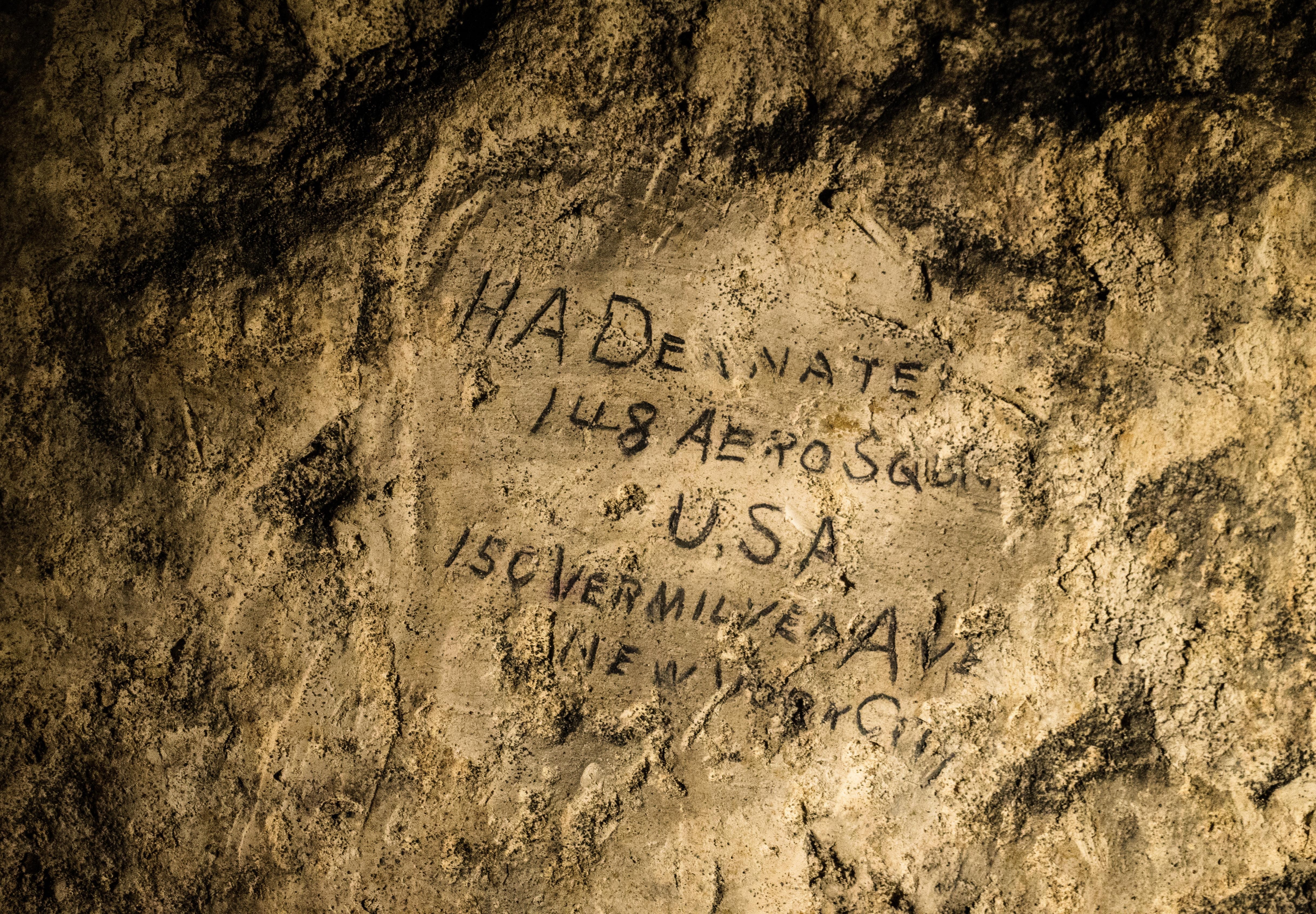 NAOURS, France -- A headlamp cuts through the darkness of a rough-hewn passage 100 feet underground to reveal an inscription: "James Cockburn 8th Durham L.I."

It's cut so clean it could have been left yesterday. Only the date next to it - April 1, 1917 - roots it in the horrors of World War I.

The piece of graffiti by a soldier in a British infantry unit is just one of nearly 2,000 century-old inscriptions that have recently come to light in Naours, a two-hour drive north of Paris. Many marked a note for posterity in the face of the doom that trench warfare a few dozen miles away would bring to many.

"It shows how soldiers form a sense of place and an understanding of their role in a harsh and hostile environment," said historian Ross Wilson of Chichester University in Britain.

Etchings, even scratched bas-reliefs, were left by many soldiers during the war. But those in Naours "would be one of the highest concentrations of inscriptions on the Western Front" that stretches from Switzerland to the North Sea, said Wilson.

The site's proximity to the Somme battlefields, where more than a million men were killed or wounded, adds to the discovery's importance. "It provides insight into how they found a sense of meaning in the conflict," said Wilson.

Naours' underground city is a 2-mile-long complex of tunnels with hundreds of chambers dug out over centuries in the chalky Picardy plateau. During the Middle Ages villagers took shelter there from marauding armies crisscrossing northern France. By the 18th century the quarry's entrance was blocked off and forgotten.

In 1887 a local priest rediscovered the site and it eventually became a tourist attraction. That's what likely drew the soldiers to it during the war, said Gilles Prilaux, an archaeologist for France's national archaeology institute. He began a three-year study of the tunnels last July, intending to focus on the site's medieval past - only to stumble upon this more recent slice of history.

"It was a big surprise," Prilaux said of the discovery of the World War I graffiti left by soldiers from Australia, Britain, Canada and the U.S.

Soldiers left similar inscriptions in tunnels at Arras and Vimy. But unlike those sites, Naours is well back from the front lines. And it wasn't known to have been used as a shelter or hospital like other Western Front quarries.

Photographer Jeff Gusky has tallied 1,821 individual names: 731 Australians, 339 British, 55 Americans, a handful of French and Canadians and 662 others whose nationalities have yet to be traced.

"All these guys wanted to be remembered," Gusky says, pointing out examples from Texas and Florida.

Naours is only a few miles from Vignacourt, a town used as a staging area for troops moving up to and back from the Somme battlefields some 25 miles to the east. Prilaux thinks that the young soldiers from distant countries would have heard about the famous "Naours caves" and taken advantage of a break from war to do some sight-seeing.

That idea is backed by an entry in the diary of Wilfred Joseph Allan Allsop, a 23-year-old private from Sydney, Australia. "At 1 p.m. 10 of us went to the famous Caves near Naours where refugees used to hide in times of Invasion," Allsop wrote on Jan. 2, 1917.

Wilson said the importance of studying graffiti like this has only emerged in the last 10 to 20 years.

"What were previously regarded as incidental acts that occur away from the battlefield have been shown to be highly important in understanding the lives of those who experienced the conflict," Wilson said.

One of the most moving inscriptions at Naours was made by Herbert John Leach, a 25-year-old from Adelaide. His inscription reads "HJ Leach. Merely a private. 13/7/16. SA Australia."

Barely a month after Leach added his name to the wall he was killed in action on Aug. 23, 1916, during the Battle of Pozieres.

On his grave, in the Australian cemetery in nearby Flers, his father inscribed "Duty Nobly Done."

11 people sentenced to death for murder of anti-poaching activist
Thanks for reading CBS NEWS.
Create your free account or log in
for more features.
View CBS News In
CBS News App Open
Chrome Safari Continue
Be the first to know
Get browser notifications for breaking news, live events, and exclusive reporting.