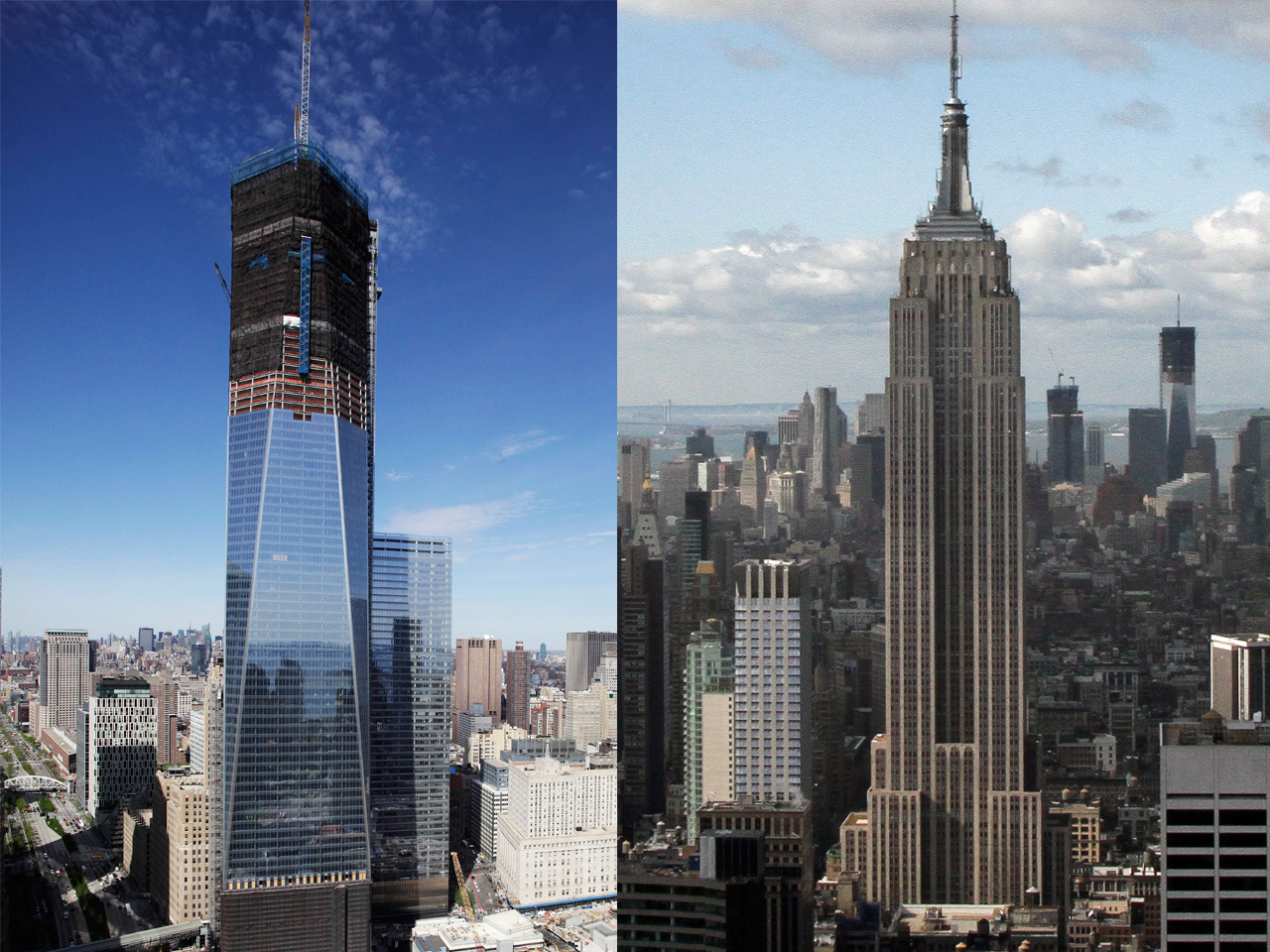 (CBS/AP) The new One World Trade Center - under construction on the site of the original World Trade Center, destroyed in the 9/11 terror attacks - has surpassed the height of the Empire State Building to become New York City's tallest building.

Workers erected steel columns that make the unfinished frame of the building a little more than 1,250 feet high - the level of the Empire State Building's highest observation deck.

The tower still isn't as high as the antenna that sits on the Empire State Building, but when complete will stand at 1,368 feet, beating out the midtown skyscraper that was for decades the world's tallest. When counting a 408-foot-tall antenna spire that will sit on its roof, the "Freedom Tower" will measures 1,776 feet.

Discounting the antenna, it will still be the second-highest building in the U.S., after the Willis Tower in Chicago. (Experts usually don't count antennas or flagpoles when measuring building height.)

Completed in 1931, the Empire State Building was the tallest free-standing structure in the world until 1967 (when Moscow's Ostankino Tower was completed), and lost its status as New York City's tallest building when the original World Trade Center (at 1,368 feet high, plus a 359-foot antenna) was completed in 1972.

Now it is being demoted again.

Experts and architects have long disagreed about where to stop measuring super-tall buildings outfitted with masts, spires and antennas that extend far above the roof.

If the Empire State Building were measured from the sidewalk to the tip of its needle-like antenna, it actually stands 1,454 feet high, well above One World Trade Center's elevation today.

Purists, though, say antennas (which can be attached or removed) shouldn't count. The Empire State Building didn't even get its distinctive antenna until 1952.

Unlike antennas, record-keepers like spires. It's a tradition that harkens back to a time when the tallest buildings in many European cities were cathedrals. Groups like the Chicago-based Council on Tall Buildings and Urban Habitats, and Emporis, a building data provider in Germany, both count spires when measuring the total height of a building, even if that spire happens to look exactly like an antenna.

This quirk in the record books has benefited buildings like Chicago's recently-opened Trump International Hotel and Tower. It is routinely listed as being between 119 to 139 feet taller than the Empire State Building, thanks to the antenna-like mast that sits on its roof, even though the average person, looking at the two buildings side by side, would probably judge the New York skyscraper to be taller.

The same factors apply to measuring the height of One World Trade Center.

Designs call for the tower's roof to stand at 1,368 feet — the same height as the north tower of the original World Trade Center. The building's roof will be topped with a 408-foot, cable-stayed mast, making the total height of the structure a symbolic 1,776 feet.

So is that needle an antenna or a spire?

"Not sure," wrote Steve Coleman, a spokesman for the Port Authority of New York and New Jersey, which owns the building.

The needle will, indeed, function as a broadcast antenna. It is described on the Port Authority's website as an antenna. On the other hand, the structure will have more meat to it than your average antenna, with external cladding encasing the broadcast mast.

As for the world's tallest building, the undisputed champion is the Burj Khalifa, in Dubai, which opened in 2010 and reaches 2,717 feet.

Mayor Michael Bloomberg told CBS Station WCBS it has been a collaborative effort: "Lots of people deserve credit, it's taken a long time. But this is probably the most complex construction site any place, ever."

As the new World Trade Center claims bragging rights for the city's tallest, the New York Post reports that on Monday night the tower will be lit up blue-and-white, characterizing the color scheme (according to unnamed sources) as a pointed dig at the Empire State Building's controversial rejection in 2010 of illuminating the building in honor of the 100th birthday of Mother Teresa.

The Empire State Building's owners declined comment, and instead told the Post, "The world's most famous office building, the ancestor of all super-tall towers, welcomes our newer, taller cousin to the skyline."