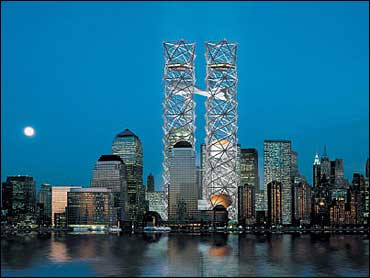 Two design plans were named as finalists for the World Trade Center site, and both would feature the world's tallest structures, officials announced Tuesday.

One proposal evokes the original trade center with twin latticework towers, while the other preserves the foundations of the twin towers.

A final choice will be made later this month by the Lower Manhattan Development Corp. and the Port Authority of New York and New Jersey, the agency that owned the World Trade Center.

Both finalist designs — by an architectural team known as THINK and by Berlin-based architect Daniel Libeskind — feature structures rising higher than the tallest in the world, Malaysia's 1,483-foot Petronas Twin Towers.

Libeskind, who designed Berlin's Jewish Museum, proposed five starkly geometrical towers and several smaller cultural buildings clustered around the foundations of the fallen towers and topped by a 1,776-foot spire.

The models each include a vision for where the victims' memorial might be built. A specific design for the memorial is expected to be chosen later this year in a separate competition. Nearly 2,800 people were killed in the attack on the trade center Sept. 11, 2001.

Libeskind and Vinoly spoke briefly at the afternoon announcement, thanking the redevelopment board for the opportunity to continue to the next phase.

"It's something that we never expected to be blessed with," Vinoly said.

The two finalists were among nine proposals for redeveloping the 16-acre World Trade Center site that were unveiled Dec. 18. The plans were selected from 407 submissions from around the world.

While no one expects an exact replica of any of the models to rise at the trade center site, officials at the development corporation have said whatever is built there will be based on one of the plans.

Recurring turf battles over control of the site may complicate the decision-making, though.

Developer Larry Silverstein, who holds the lease to the trade center site, complained in a letter to development corporation chairman John Whitehead last week that the proposed designs do not include enough office space.

A first group of plans, released in July, was criticized as boring and overstuffed with office space.