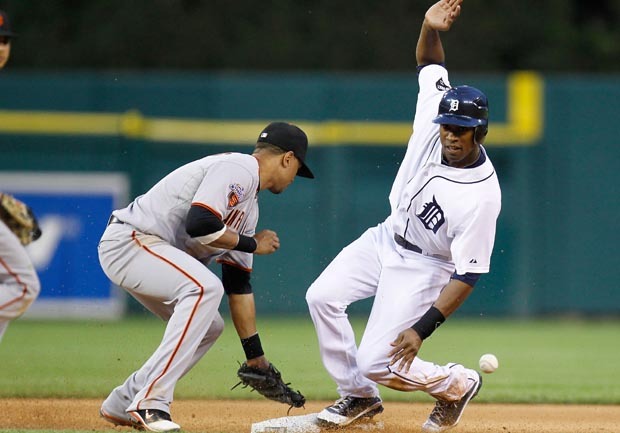 The World Series makes for a unique pairing. The San Francisco Giants and Detroit Tigers have been around for well over a century yet they've never faced each other in the postseason.

They don't have a lot of recent history, either. The clubs have played only 12 games since interleague action began in 1997, most recently last year.

Detroit is loaded with power bats and arms, managed by wily Jim Leyland and coming off an impressive sweep. The surging squad from San Francisco, boosted by its rotation and talented catcher Buster Posey, is fresh from a Game 7 win over defending champion St. Louis.

A Triple Crown winner in Miguel Cabrera versus a perfect-game pitcher in Matt Cain. The Motor City vs. the City by the Bay, starting with Game 1 on Wednesday in the California twilight.

"I'll have to learn a lot about them real soon, to be honest," Giants manager Bruce Bochy said.

"I know what a great club they are. And we know all about the guy we're going to be facing opening day and their whole staff," he said. "They swept the Yankees. That tells you how good they are."

Justin Verlander will throw the first pitch for the Tigers. Bochy said he hasn't looked that far in advance.

"From day one of spring training, we're getting ready for this," Giants center fielder Angel Pagan said. "We're going to be ready. We're going to just keep playing baseball like we do."

Much has changed since then.

Prince Fielder arrived in Detroit this year after a season-ending injury to Victor Martinez, and teamed with Cabrera as a most formidable tandem in the middle of the lineup. Cabrera will be the first Triple Crown winner to play in the World Series since Carl Yastrzemski and Boston lost in 1967.

The Giants bolstered their infield by trading for scrappy Marco Scutaro in late July, and he became the MVP of the just-finished National League Championship Series. They fortified their outfield a few days later by getting Hunter Pence from Philadelphia.

Closer Brian Wilson helped San Francisco win the 2010 World Series, but is out this season because of an elbow injury. The bearded reliever became a loud cheerleader in the dugout as the Giants overcame a 2-0 deficit against Cincinnati in the division series, then rallied from 3-1 down to beat the Cardinals in the NLCS.

San Francisco closed out the Cardinals 9-0 on Monday, getting the final out in a driving rainstorm at AT&T Park.

The Tigers, back in the World Series for the first time since 2006 and trying to win their first crown since Sparky Anderson's gang in 1984, relied on excitable closer Jose Valverde until the playoffs. But when he struggled against the Oakland Athletics and Yankees, Leyland looked for other options.

Leyland has certainly had time to prepare for this matchup - not that it's a good thing. The Tigers will have had five days off since dismantling the Yankees, and the 67-year-old manager will have worked out how to use ALCS MVP Delmon Young, with no designated hitter allowed in the National League ballpark.

The Tigers also had nearly a week off before starting the 2006 World Series, and the team from the Rust Belt looked rusty. Detroit pitchers made five errors in a five-game wipeout by the Cardinals.

A troubling trend, perhaps: The three previous times one league championship ended in a sweep while the other went seven games, each time the team that played Game 7 easily won the World Series.

Then again, the Tigers have Verlander totally rested for the opener.

The reigning AL MVP and Cy Young Award winner is dominating this postseason, going 3-0 with a 0.74 ERA, striking out 25 in 24 1-3 innings. CBSSports.com's Dayn Perry says Verlander and the rest of the Tigers' rested rotation give Detroit a slight edge in the Fall Classic.

"Regardless of whom they trot out, the Tigers get the nod. All four right-handers will make their first starts on extra rest, and all four are on a roll," Perry writes. "As well, the Giants this season were slightly less effective against right-handed pitching than they were against lefties."

Barry Zito is likely to pitch Game 1 for Bochy's bunch. Left off the postseason roster in 2010 - his poor pitching didn't fit with the Giants' self-described group of "misfits" - he has resurrected his career this year and made a key start in the NLCS.

Not so sure is what will become of Tim Lincecum. A star on the title team two years ago, the shaggy-haired two-time Cy Young winner struggled this season. Bumped from the playoff rotation, he excelled in the bullpen and earned a start, but was shaky in Game 4 against St. Louis.