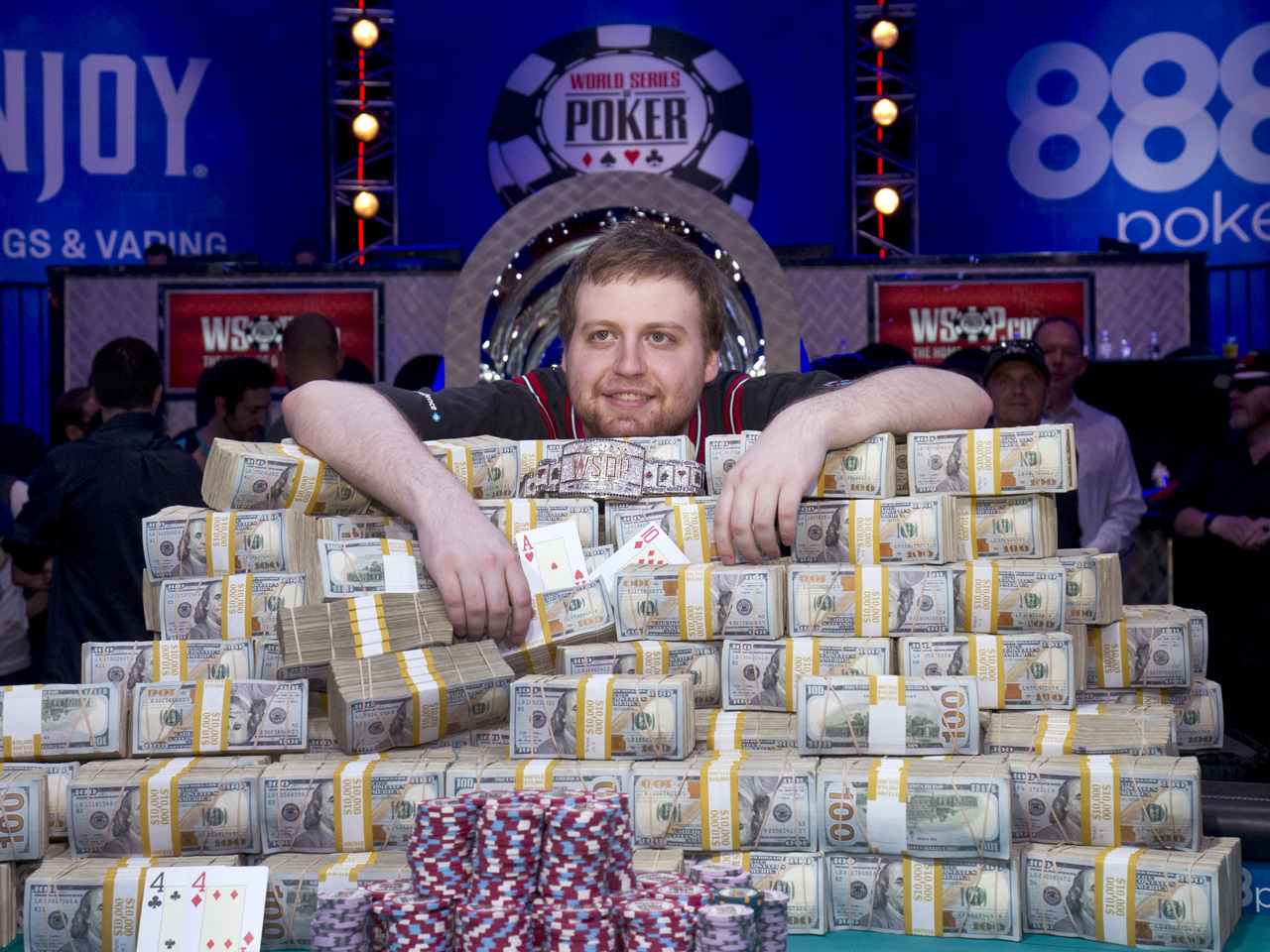 LAS VEGAS - For Joe McKeehen, the 24-year-old newly minted World Series of Poker champion from a Philadelphia suburb, it's all about the numbers.

The unassuming "average Joe" poker pro as he has referred to himself wore sports jerseys and sweat pants, surrounded by players dressed in tailored suits or wearing trendy scarves, before winning $7.68 million, after outlasting 6,419 others who entered and risked $10,000 for the chance.

The numbers turned out to be in his favor as he sat comfortably with an overwhelming lead and went head-to-head with 25-year-old Joshua Beckley of New Jersey Tuesday night.

Beckley had a pair of fours and better odds at surviving to live another hand, but luck was on McKeehen's side.

McKeehen started with an ace-10, securing another 10 on the flop. The game was his.

His victory came after he had earlier knocked out six of the eight other Main Event finalists in three days.

"I love seeing a dominating force come in with the chip lead, hold the chip lead, continue to play well, continue to overcome obstacles and win," said Jack Effel, the World Series of Poker's tournament director. "That shows the true skill of the game."

For three days, McKeehen maintained a lead in the tournament's no limit Texas Hold 'em Main Event - a game requiring deliberate thought about when to bluff, how much to raise, when to fold, and when to go all-in based on what you have and what you think your foes may hold.

It started with number hunts around the neighborhood to search out addresses on the sides of houses with his dad, a quest that had the added benefit of tiring the toddler out.

Drives to day care or school involved Joe screaming out the numbers he saw on passing busses, Gina said.

When he got food poisoning as a child and had to get an IV, Brent McKeehen said he was drawn to the digital readout because the numbers kept changing.

"As soon as he thought about the numbers, he forgot about the pain," Brent McKeehen said.

It translated to board games. A much younger McKeehen once won a Risk world championship, a feat he's downplayed in the lead up to his World Series of Poker run.

Eventually McKeehen found himself majoring in mathematics at Arcadia University in Pennsylvania, graduating in 2013. When his senior year professor Ned Wolff asked the class what they wanted to do with their degrees, he heard the usual: engineering, actuarial science, secondary education - until he got to McKeehen.

"I want to play poker," Wolff said he announced to laughs.

"But they're not laughing now," Wolff said.

After winning Tuesday, McKeehen said he had always been confident he could make a living at this.

"This is definitely the greatest accomplishment anyone can do," he said. "I'm very happy to have done it."

He doesn't yet know what he'll do with his new winnings. But he already spent some money to keep a promise to his late cousin, 25-year-old Alicia Jayne Rougeux, who died in 2013 from an illness before she could meet him in Las Vegas to see him play. McKeehen brought her mother Theresa Wood, to the Main Event, where she sat in the stands directly behind McKeehen with his parents.

"She would be thrilled for him," Wood said.