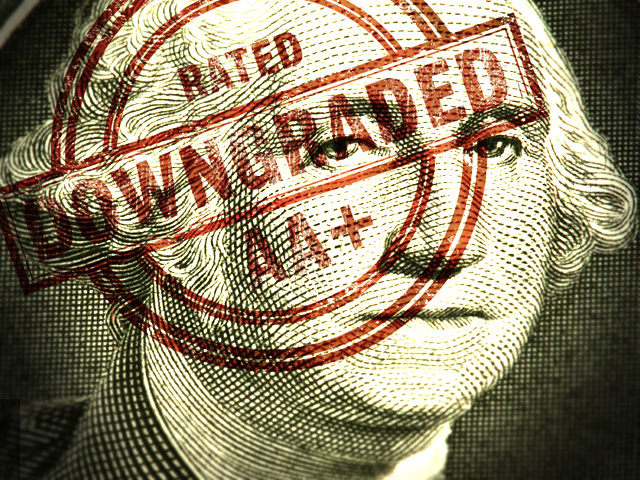 Deputies from the Group of 20 advanced and emerging economies talked by telephone Sunday about proposals to minimize market shocks, South Korea's central bank said. And the financial ministers from the Group of Seven economies planned talks before Asian markets open Monday.

The countries are concerned Standard & Poor's downgrade of the U.S. credit rating late Friday will shake global markets. In a sign of the fallout, Middle East markets tumbled Sunday on the first day of business after the downgrade.

Kyodo News agency reported Sunday that G-7 deputy finance ministers had agreed on a conference call among the higher-level ministers, who are likely to discuss the U.S. downgrade as well as the eurozone sovereign debt concerns.

Japan's Senior Vice Finance Minister Fumihiko Igarashi hinted Sunday that Tokyo would intervene again in the currency market if excessive fluctuations continue. It acted Thursday to weaken the yen and protect Japan's recovery from an earthquake and tsunami in March.

"It's not over yet. We will act again if we see speculative moves," Igarashi said on a talk show Sunday on public broadcaster NHK, referring to a possibility for more rounds of yen-selling intervention.

The Bank of Korea, South Korea's central bank, said in a statement Sunday that deputy officials from the Group of 20 advanced and emerging economies talked by phone and that G-20 officials plan to continue to strengthen policy coordination to pursue a common response. South Korea is a G-20 member.

The statement, issued after a meeting of South Korean finance officials, also said the S&P downgrade had not changed South Korea's confidence regarding U.S. Treasury.

China, the largest foreign holder of U.S. debt, has yet to comment on the downgrade.

However, in an editorial Sunday, the ruling Communist Party's flagship People's Daily newspaper called it a "warning bell" for countries like China whose economies are heavily reliant on exports.

"Regardless of whether they are Asian countries that export manufactured goods or Latin America, the Middle East and Russia that rely on exports of natural resources, all now face the threat of seeing their holdings of U.S. debt decline in value and deteriorate in liquidity," the paper said.

Credit rating agency S&P said it would strip the U.S. of its sterling AAA credit rating for the first time and move it down one notch, to AA+.

"Our initial sense is that the S&P decision will do nothing to calm jangled nerves at the beginning of the week," Russell Jones, of Australia's Westpac Institutional Bank, wrote in a report Sunday. "Treasury yields are initially likely to move higher, perhaps sharply so, and risk assets will also suffer further losses."

Still, he added that Treasury weakness was unlikely to last long for various factors, including that the U.S. still retains its top credit rating with Moody's Investors Service and Fitch Ratings.

Middle East markets, open Sunday through Thursday, were the first to react to the downgrade. Egypt's benchmark EGX30 index fell more than 4 percent, and other Gulf markets also were sharply lower.

Israel's Tel Aviv Stock Exchange delayed the start of the week's first session after pre-market trade showed the benchmark index dropping more than 6 percent because of concerns over the U.S. debt rating cut. Exchange spokeswoman Idit Yaaron said the start was pushed back by 45 minutes "so market players will have time to react logically and not under pressure."

U.S. markets and others reopen Monday but have had rough patches recently. The Dow Jones industrial average dropped 512 points Thursday, its worst performance since the financial crisis of 2008, and regained only a fraction of that drop Friday.

Japan's Nikkei index lost ground in the past week due to debt crisis developments.

Both Italian Premier Silvio Berlusconi and EU Monetary Affairs Commissioner Olli Rehn on Friday called for coordination between G-7 countries, saying the crisis has to be tackled on a global level.

The G-7 includes Britain, Canada, France, Germany, Italy, the U.S. and Japan, while the G-20 includes those countries and others with large and emerging economies.

Many economists see the world's big central banks as the last line of defense at this moment in the crisis, after policymakers in Europe and the U.S. have failed to agree on the kind of shock-and-awe moves that many investors demand.

In the eurozone, the summer recess of national parliaments is relaying the implementation of crucial changes to the currency union's bailout fund that could help save Italy and Spain from expensive bailouts.

Many investors have also been calling on the U.S. Federal Reserve to start pumping money into the American economy again to help underpin the slowing economic recovery.