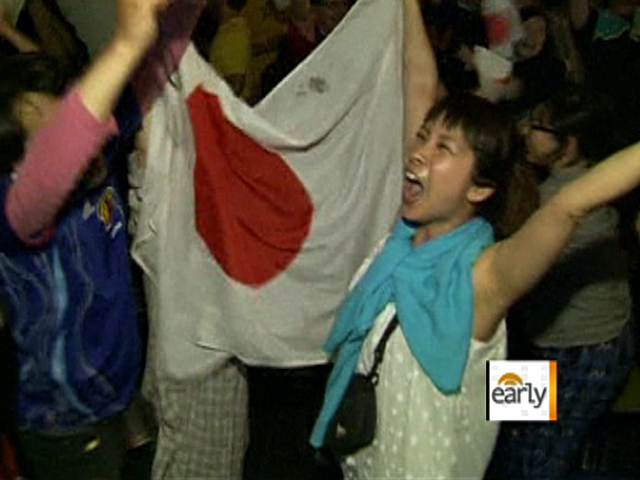 The U.S. women's team suffered a heartbreaking loss at the World Cup finals in Germany Sunday. But for the victorious Japanese team, their come-from-behind win held special meaning.

For the underdog Japanese team, CBS News Lucy Craft reports, the win on Sunday was an exhilarating moment.

From Frankfurt to Tokyo to Cambridge Mass., people celebrated Japan's 3-to-1 overtime victory over the favored United States.

Japanese fan Asuka Sanito told CBS News, "I was totally surprised. The Japanese have such small figures, but they still played so bravely."

"It means everything," Anjo Siang said. "Japan loves sports. It's about time we won."

Japan is the first Asian nation to win the FIFA World Cup in either men's or women's competition.

The game began at 3:45 in the morning in Tokyo, but it seemed as though an entire country was awake and watching.

Kazuhiro Teramoto said, "They just demonstrated Japan's tenacity; catching up with their opponent again and again. They were great."

The victory was especially sweet for a country suffering from one of the worst natural disasters of recent times - the March 11 earthquake and tsunami that claimed 23,000 lives and left an ongoing nuclear crisis.

Tom Byer, an American soccer coach in Japan, said, "It means everything again because of the tragedy and despair that we have had for these last several months. ... Everybody's just over the top of it."