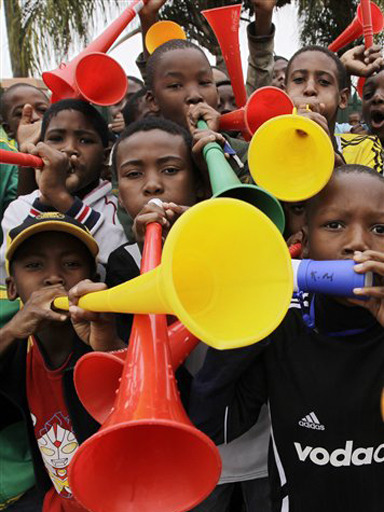 How would you feel if someone from overseas went with you to an NBA game and told you to go and ask someone to just stop right now with that dreadful "Final Countdown" music with two minutes to go?

"For God's sake," they might say. "This song is by a band called Europe. They're Swedish."

How would you feel if someone from, say, Africa, accompanied you to a Washington Redskins game and wondered if you might not choose to dress in grandmamma drag?

"And," they might add, "could you please leave the pig snout at home?"

So please imagine how the people of South Africa must be feeling when they hear the whining about their vuvuzelas.

These trumpets that offer the hum of life during World Cup games seem to have upset a cross section of narrow minds.

Commentators have complained. Television viewers have claimed it is mashing their couch potatodom. Appeals have been made to FIFA, soccer's governing body.

And I haven't even mentioned the players.

French captain Patrice Evra complained that these innocuous trumpets affected his team's performance in its opening game against Uruguay.

The Serbian team, also after a poor performance, bemoaned the noise in its match against Ghana.

"Please," say the whiners, "can you just stop people from bringing the vuvuzelas to the games?"

"Isn't it enough that we agreed to finally have our World Cup in that somewhat Godforsaken continent? Do they have to blow their own trumpets, rather than ours?"

For once, FIFA reacted with remarkable intelligence.

FIFA President Sepp Blatter declared on Twitter: "I don't see banning the music traditions of fans in their own country. Would you want to see a ban on the fan traditions in your country?"

There are even players who have sufficient respect for the fact that they are playing in someone else's country that they realize they should be embraced, not stifled.

England defender, Jamie Carragher, for example, revealed to the BBC that his children had already asked him to bring vuvuzelas back home with him.

The Liverpool player added: "Anyone who watches me play at Anfield (Liverpool's home stadium) will know that I am louder than the vuvuzelas."

Yet the incessant buzz of complaints continues.

Perhaps when the next World Cup is held in Brazil, there will be demands for a cessation of samba.

Perhaps if the World Cup is ever again held in England, there will be demands for a cessation of all songs featuring one or more four-letter words.

And perhaps if the World Cup is ever again held in Italy, someone might remind a section of the Italian faithful that it doesn't look too good on TV when you offer Nazi salutes.

This is not a question of "When in Rome."

This is a question of appreciating how a people chooses to celebrate the fact that the most important tournament of the world's most beloved game is being held in their country.

Argentina's Lionel Messi, perhaps the best player on view, is a vuvuzela critic.

"It's impossible to communicate," he said. "It's like being deaf."

Yes, those who rail against vuvuzelas are deaf. Blind, too.