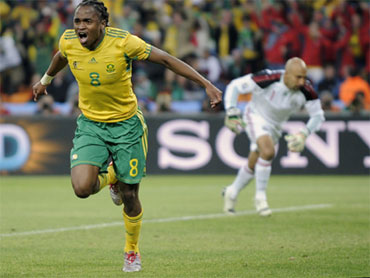 South Africa nearly made a perfect start to the World Cup on Friday, scoring early in the second half before conceding a late goal in a 1-1 draw with Mexico in the opening match of the tournament.

Rafael Marquez provided the heart-breaking equalizer after Andres Guardado floated in a left-footed cross from the left. The unmarked Marquez controlled the ball and side-footed it into the net in the 79th minute.

Siphiwe Tshabalala had given the host nation a dream start, finishing off a well-worked move in the 55th to set off wild celebrations at Soccer City among the more than 90,000 horn-blowing fans.

The hosts strung together a fine series of passes from inside their own half and Kagisho Dikgacoi found Tshabalala clear of the Mexican defense. With no one in support, the winger let fly with a powerful left-footed angled shot which flew past the goalkeeper into the far corner.

"We could easily have won the game," South Africa coach Carlos Alberto Parreira said. "All in all at the end a draw is a fair result. We are still in the competition. This group is very tough."

The South Africans came close to scoring a winner in the 90th when Katlego Mphela got clear of two markers but his shot hit the near post.

"The team that makes four points will qualify," Parreira said. "Whatever happens against Uruguay, this group will be decided in the last game against France."

The first World Cup match to be staged on the continent followed a day of celebration throughout all of Africa - though the excitement was tempered by the death of Nelson Mandela's great-granddaughter in a car accident on the eve of the tournament.

Beyond the personal heartbreak, the tragedy stole a moment of triumph from the 91-year-old anti-apartheid leader, who campaigned to bring the World Cup to his nation despite skepticism it could be pulled off. Mandela mourned with his family and opted not to attend the match or the colorful opening ceremony that preceded it.

Early in the match, Mexico coach Javier Aguirre kept his word as the Mexicans attacked in force from the kickoff. The hosts could have been a goal down inside the first two minutes when goalkeeper Itumeleng Khune fumbled a low cross. Giovani Dos Santos was presented with an easy shot at goal but South Africa captain Aaron Mokoena rescued his team with a well-timed block.

The attack-minded Mexicans continued to create chances but lacked accuracy and, when Carlos Vela had the ball in the net from a flicked-on corner, it was disallowed for offside.

Forced to defend for most of the time, the South Africans posed few threats but went close just before halftime. Tshabalala's cross from the left found Mphela unmarked in front of goal but he failed to reach it with only the goalkeeper to beat.

After falling behind to a top quality South Africa goal, the Mexicans responded quickly and Dos Santos cut inside on the right to fire a left footed drive which goalkeeper Khuna did well to push round the post.

They needed change in attack, however, and veteran Cuauhtemoc Blanco and Javier Hernandez went on with less then 20 minutes to go.

France and Uruguay face each other in the other Group A match on Friday. 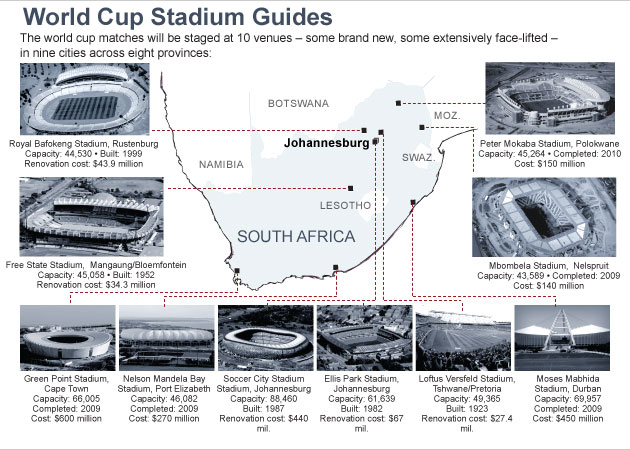