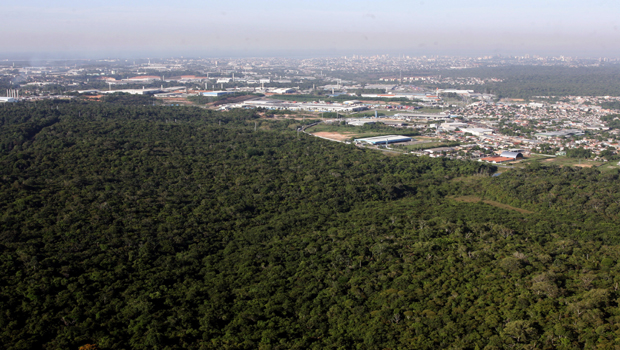 MANAUS, Brazil -- Death by giant snakes, malarial mosquitoes or drug-addled, knife-wielding thieves: If the barrage of blood-soaked headlines in the British tabloids is to be believed, that's what awaits soccer fans travelling to the most exotic of Brazil's World Cup host cities, the Amazonian metropolis of Manaus.

Despite Manaus' far-flung location in the heart of the world's biggest rainforest, making it reachable only by plane or boat, the ills most likely to affect the 52,000 or so foreigners expected for soccer's premier tournament are disappointingly mundane. Visitors to this city of 2 million are far more likely to spend hours locked in bumper-to-bumper gridlock than even cross paths with a python - let alone be strangled by one.

"People need to study geography," quipped Ketlen dos Santos Alves, a 20-year-old college student and Manaus native. "Yes, Manaus is in the Amazon, but it's also a huge city. How do foreigners actually believe there are snakes hanging from every tree and caimans hiding in the gutters?"

While the forest fauna is largely absent from the city itself, nature makes itself felt in the hothouse climate and the blooms of mold that envelop the low-slung concrete buildings. With humidity hovering around 80 percent year-round, even just sitting motionless, out of doors is a sweat-inducing activity.

To help acclimate its players, the England soccer squad is training in multiple layers of long-sleeved clothing as it prepares to face Italy on June 15 in the first of four World Cup matches being held in Manaus's new $229 million Arena Amazonas stadium.

"There are two seasons in Manaus - summer and hell," a local adage goes.

Clearly, the eight teams slated to play in the city, the U.S., England, Italy, Switzerland, Croatia, Cameroon, Portugal and Honduras, have their work cut out for them in dealing with the heat and humidity.

But for the adventurous tourists heading here, a unique city rich in tradition awaits.

Manaus got its start as a Portuguese fort, founded in the late 17th century on the spot where the Rio Negro and Solmoes rivers meet to form the immense Amazon, the planet's largest river by volume.

The city blossomed during the rubber boom of the late 1800s, briefly becoming one of the world's wealthiest cities. During its heyday, extravagant rubber barons spared no expense on their vanity project, a stately opera house designed to rival Paris' Opera Garnier, made from the finest materials ferried in from Italy, Britain and France. The stylish Adolfo Lisboa Municipal Market was modeled on Paris' Les Halles market.

In the early 1900s, competition from rubber plantations in Asia caused the price of the milky tree sap to plummet, sending Manaus into a decades-long spiral.

It wasn't until the 1960s that an immense industrial zone on the northern bank of the Amazon helped breathe new life into the city. Now, gas flares burn bright at a riverside oil refinery, while puffing smokestacks poke above the verdant tree line as Honda, Harley Davidson, Suzuki and other international companies churn out auto parts, assemble motorcycles and manufacture electronics.

While Manaus now suffers from the triumvirate of urban ills plaguing nearly every Brazilian city - chaotic planning, terrible traffic and iffy security - the upshot is that visitors can escape it all within minutes. The port area, with its cacophony of fishmongers flaying 40-kilo (88-pound)-plus "pirurucus" and fruit sellers hauling giant banana bunches the size of chandeliers, is dotted with speedboats-for-hire that within a quarter of hour can carry visitors past the urban sprawl to emerald jungle as far as the eye can see.

It's in the throbbing forest that the British tabloids' reports on Manaus take on a semblance of truth. Here, there really are giant insects, from palm-sized beetles with jaws mighty enough to amputate the tip of a human finger to pencil-length "stick bugs," which look like twigs come to life atop impossibly spindly legs. Sleepy-eyed sloths inch through the canopy, while snapping caimans, razor-toothed piranhas and lumpy, pink freshwater dolphins called "botos" ply the rivers.

Mosquitoes and other insects are so thick at dusk that malaria, yellow fever and leishmaniasis, which causes skin to break out in unsightly ulcers, represent a real threat in the jungle. There's also the "candiru," a narrow catfish that feeds off blood and is said to swim up any available human orifice. (Guides warn potential river swimmers not to urinate in the water.)

Indigenous peoples live in thatched-roof villages carved out of the forest, and the riverbanks are lined with floating houses, restaurants, general stores and bars that rise and fall with the seasonal floodwaters.

Water is a way of life for the "ribeirinhos," as the river dwellers are known in Portuguese.

Kids backflip off the porches into the water to impress passengers in passing boats, while adults sip cans of beer as they lounge atop floating refrigerators and tend to fish ribs roasting on the barbecue. Some offer up the fresh water turtles they raise for meat. Everyone waves and smiles.

"Twenty years later, here I am," he said.