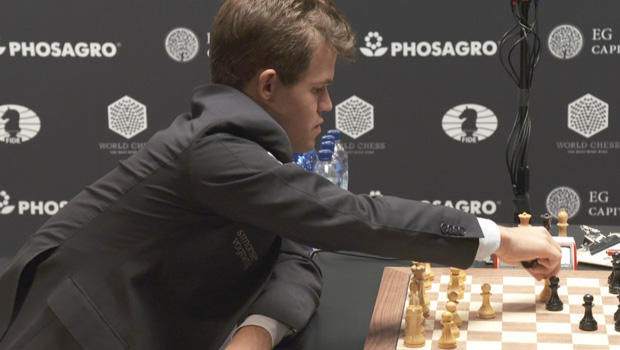 The World Chess Championship -- the first held in the United States in 21 years -- resumes with Game Three today, after Friday and Saturday’s games both ended in a draw.

Over the next few weeks, defending champion Magnus Carlsen of Norway will face Sergey Karjakin of Russia. They are considered among the best chess players in the world.

And anyone who has seen or heard of Magnus Carlsen knows he’s the chess world’s best player to watch in some time.

Before Magnus Carlsen made his first move in the world chess championships, Vladimir Duthiers asked him to take on a few of the local chess sharks in New York’s Washington Square Park, where for five dollars a game curious tourists are offered a lesson in defeat every day.

Well, every day but today.

Because to get a sense of how good the world’s top-ranked chess player is, you only need to see him dispense with three opponents in under three minutes.

Duthiers asked, “There are people who’ve said that you haven’t even hit your peak yet, that you’re still progressing, you’re still growing as a player. Do you feel like that?”

“Well, the thing is I feel like I’m still learning. I’m learning all the time,” Carlsen replied. “I feel that I know just incomparably much more about chess now than I did, let’s say, six years ago. But my level of play is not that different.”

You could say Carlsen’s level of play has been pretty high since he was barely a teenager. At 13 he played Garry Kasparov, considered by most to be the greatest chess champion of all time. The young and seemingly restless kid from Norway played the Russian grandmaster to a draw in 2004.

“It’s always about fighting for those key squares in the center,” Carlsen said. “Because if you control the center, you can move more easily from side to side.”

Now 25 years old and a two-time world champion himself, Carlsen retains his love of the game as much as he reveres its history.

Take the table at New York’s Marshall Chess Club, where Bobby Fischer played a tournament in 1966. “At that time naturally he wasn’t allowed to go to Havana because of sanctions the U.S. had against the Cubans. So he played from this table at the Marshall Chess Club and they transmitted his moves via telex, which I think is very fascinating.”

So, when was the last time Carlsen lost? “Well, l mean, Michael Jordan says he’s the one who’s missed the most shots in the history of basketball. So I’ve lost tens of thousands of chess games, and most recently was just a few days ago, on a game I played on the Internet.”

Yes, he played anonymously, and lost to a random person. “Do you know what country that person was in?” Duthiers asked.

Chess grandmaster Sergey Karjakin has played Carlsen 47 times. He’s won eight, Carlsen’s won 18, and 21 have ended in a draw. The first time they played was in 2005, when Carlsen was 14, Karjakin 15.

Back then it was Karjakin who had the edge. He remains the youngest player to be named a grandmaster, which he was at 12. Carlsen earned the title at 13.

“I always looked up to him and remember when I was, like, 11 years old I thought, ‘Well, I’m never going to be as good as this Karjakin guy!” Carlsen laughed.

This will be the first time the two have met in the world championship, a match that will span up to 12 rounds over the next two weeks. Games can last up to six hours.

Though he may have lost a few anonymous games online, Magnus Carlsen is at his best in close proximity. Call it an advantage in intimidation.

“In the recent games that we’ve played, I feel like I’ve had the psychological edge,” he said. “I certainly have won more games against him than he has won against me. So I have confidence that I can beat him. Also I have the advantage, I think, of being the better chess player!”