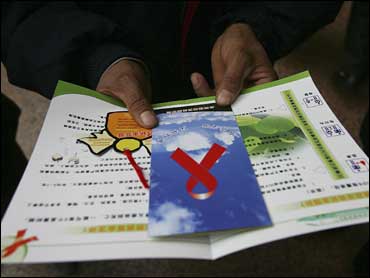 Circumcision, microbicides and microfinance. These are some of the most promising options being examined as potential ways to prevent AIDS.

As World AIDS Day is marked Friday, some public health experts are saying the current focus on universal access to lifesaving antiretroviral drugs has had an unintended effect: sidelining prevention. Without a vaccine, preventing HIV infections is key to controlling the pandemic.

New strategies that attempt to change the very environment of AIDS transmission are now being considered. A study published online Thursday in the British medical journal The Lancet describes how a microfinance project in South Africa cut women's chances of domestic violence by more than half.

Friday marked the 19th World AIDS Day, the 25th year since the first case of AIDS was identified and 10 years since the formation of UNAIDS, the U.N. arm formed to fight the virus.

There is a strong link between HIV transmission and abusive relationships, with abusive men more likely to have multiple partners or to become violent if asked to use condoms.

"If you address the broader risk environment, women and communities can be quite creative in finding solutions," said Dr. Julia Kim, one of the Lancet study's authors.

In the study, 430 women in rural South Africa were loaned money to start small businesses. Most women sold fruit, vegetables or clothes, or offered tailoring services. With economic and social independence, women were no longer obligated to remain in violent relationships.

Rates of HIV infection continue to grow, with 4 million new cases worldwide every year. The battle continues to be waged even in countries that previously were models of control. Due to erratic condom use and the virus' spread into new populations, like married women, HIV has made a worrying return to countries such as Thailand and Uganda.

"We need to run faster to get ahead of the virus," said Jennifer Kates, vice president and director of HIV policy at the Kaiser Family Foundation, an independent U.S.-based organization that works on AIDS issues worldwide. Because the AIDS outbreak is accelerating, so too must the public health response.

Dr. Purnima Mane, a senior UNAIDS official, estimates that public health officials need to plan for at least the next two decades before seeing a substantial decline.

There is no one-size-fits-all solution. Only in sub-Saharan Africa is AIDS really hitting the general population. In the rest of the world, intravenous drug users, prostitutes and gay men are at highest risk.

"You have to focus on where transmission is actually occurring," said Dr. Kevin De Cock, director of the HIV/AIDS department at the World Health Organization. Surprisingly little information is available on how most HIV infections are acquired. Without that, it is difficult to know which interventions would be most effective.

Even when countries do know where AIDS is spreading the fastest, there is no guarantee they will focus on the epicenter. In Latin America, the disease primarily infects gay men. In much of Russia and eastern Europe, it is drug users. Yet in both regions, most resources go toward educating general populations.

"We would make quite a bit of headway if countries acted on the information they had," Mane said.

Governments must be held accountable for their choices, said Dr. Jim Yong Kim, an AIDS expert at Brigham and Women's Hospital and Harvard University. Kim advocates "prevention scores," which would rate governments on how appropriately their AIDS dollars were being spent.

Potential solutions include microbicides, pre-exposure use of antiretrovirals and circumcision.

Microbicides under study or development include a vaginal gel that could help women protect themselves against HIV in countries where men are notoriously reluctant to use condoms, and substances that enhance natural vaginal defense mechanisms by maintaining an acidic pH, killing pathogens by stripping them of their outer covering or preventing replication of the virus after it has entered the cell.

Preliminary trials in South Africa last year showed circumcised men were 60 percent less likely than uncircumcised men to become infected from female partners. New data from trials in Uganda and Kenya are due in mid-December from the National Institutes of Health in the United States, the trials' sponsor.

Still, experts say there is no silver bullet. Success ultimately hinges on implementation.

"It will be so disappointing if we have a new tool but we can't deliver it," said Kim, adding that bottlenecks in health care need to be addressed now if the outbreak is to be curbed.

While WHO's ambitious "3 by 5" strategy, an attempt to put 3 million people on antiretrovirals by 2005, failed to reach its target, the urgency inspired by the campaign did galvanize the global community. Much of that drive has dissipated since the campaign ended. A recent report from the International Treatment Preparedness Coalition says efforts are stagnating, meaning the world will miss the UNAIDS 2010 target of treating 9.8 million people by more than half.

Kim said public health experts have an unfortunate tendency to spend too much time in meetings before taking action.

"While officials work on a process of getting consensus and no one is held accountable," he said, "poor people die."

At the White House, President Bush marked World AIDS Day by saying the disease "can be defeated."

The president called on Congress to reauthorize a $2 billion program for people with HIV and AIDS. It stalled earlier this year when there were objections from senators in more urban states that would lose millions to rural areas.

But Mr. Bush says World AIDS Day is a time for the United States to remember it has what he calls "a duty to do something about" the pandemic.

In New York Thursday, U.N. Secretary-General Kofi Annan urged people around the world to hold their leaders accountable and to keep momentum strong in the fight against AIDS.

At a public commemoration ceremony held at St. Bartholomew's Church, Annan told the audience that the virus, which has killed 25 million people and infected 40 million more, is "the greatest challenge of our generation," but noted changing attitudes in the last decade.