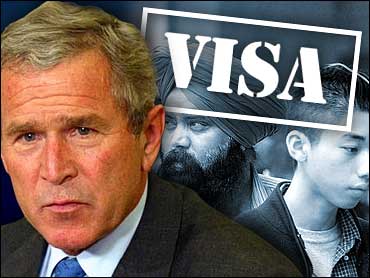 Dolores, a child-care worker in Texas, is an illegal immigrant who has long feared being deported and having to leave her children behind. President Bush's immigration proposal is intended for people like herself, but that hasn't allayed Dolores' concerns.

Under the Bush plan, Dolores and millions of others like her could temporarily work legally in this country. But once that time is up, she'd have to leave. And that, Dolores says, would break up her family.

"For 17 years I've wanted to be able to walk on the streets without fear," said Dolores, a mother of three, originally from Mexico, who lives in El Paso. She asked that her last name not be used.

President Bush has proposed allowing immigrants already working illegally in the country to get short-term legal status while participating in a worker program. The program also would be open to people from overseas.

Once their jobs end, temporary workers would have to leave the country to apply for legal permanent residence. Those who entered illegally may not be able to return for years.

That leaves Congress with questions as it considers the Bush plan. What will it do about undocumented immigrants like Dolores whose children are U.S. citizens? Or whose spouses are legal permanent residents? Should the temporary workers still be forced to leave?

"Do we have the appetite for asking parents of U.S. citizens to leave?" asked Muzaffar Chishti, director of New York University Law School's Migration Policy Institute office. "Are we morally prepared to, in effect, also deport a large number of U.S. citizens? That's sort of the moral dilemma here."

President Bush's plan gets its first hearing in Congress on Thursday, when a Senate subcommittee considers it. Taylor Gross, a White House spokesman, said the president is willing to consider suggestions for improving his plan.

The former Immigration and Naturalization Service, whose duties were transferred last year to three agencies in the Homeland Security Department, calculated the undocumented population to be about 7 million last year. There are an estimated 3 million children who are U.S. citizens and have undocumented parents, said Michael Fix, director of immigration studies at the liberal-leaning Urban Institute.

Congress has struggled with the complexities of immigrant families in the past. The 1986 immigration reforms allowed many undocumented immigrants to gain legal status. But Congress had to pass another law four years later to protect their family members from deportation, said Cecilia Munoz, spokeswoman for the National Council of La Raza, a Hispanic advocacy group.

When Congress has tried to control immigration by denying social services, immigrants' U.S. citizen children have missed out on services they are entitled to, like vaccinations, Munoz said.

"Our laws and our policy debate tend not to recognize that immigrant communities do not live in isolation from the rest of America," she said. "It's very common for families to have some people who are citizens and some who are residents and some who are here without papers."

The country already has some temporary worker programs, such as the H1-B program for more highly skilled professionals, who can apply for legal status through their employers. Their spouses and children are included on their applications.

The Bush proposal also would allow the undocumented immigrants in the temporary worker program to apply for legal permanent residence through an employer. But immigration experts say that can't happen unless Congress waives a law barring people in the country illegally from re-entering for three to 10 years and reduces waits for approval of legal permanent residence applications.

President Bush's proposal is similar to a bill proposed last year by Sen. John Cornyn, R-Texas, who says workers should have to return home to apply for green cards. Cornyn proposes withholding some money from workers' wages in savings accounts and releasing the money when workers return to their country. Cornyn said a "two-step strategy" that treats undocumented workers with families in the United States differently from temporary workers coming to the country for the first time.

"I don't believe there's the political will to deport 6 million people," said Cornyn, estimating the number of people in that category.

A bill introduced by Senate Minority Leader Tom Daschle, D-S.D., and Sen. Chuck Hagel, R-Neb., would allow undocumented immigrants who have been in the country at least five years to apply for legal permanent residence after four years of work. The bill also would increase family visas.

"One of the inconsistencies of our current law is that we force families apart," Hagel said.