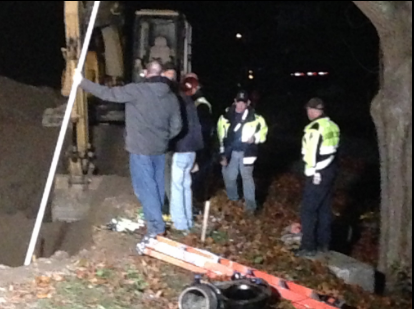 DUXBURY, Mass. -- A crew was laying down a water main on Saturday afternoon when a man who was cutting a pipe suddenly lost control of a power saw with fatal results. He was killed in a gruesome worksite accident, CBS Boston reported.

“The saw jammed on him and kicked back and got him in the throat. And you know, he stumbled and went down and we tried to do everything we could to stop the bleeding until the paramedics arrived,” he said.

As his fellow worker died in a construction hole, Romanelli did everything he could.

“I ripped off my jacket and my safety vest and I stuffed it into his throat where the cut was and I tried to just apply pressure, kept him upright, tried to keep the blood from coming out,” Romanelli said.

Paramedics rushed Sanderson to Beth Israel in Plymouth, but he later died.

“He was down in the trench,” Nord said. “There was a bit of extrication that had to be involved getting him into, on a backboard getting him up out of the trench to street side so we could get him in the ambulance.”

Authorities worked into the night.

The Occupational Safety and Health Administration and other agencies will investigate the accident.