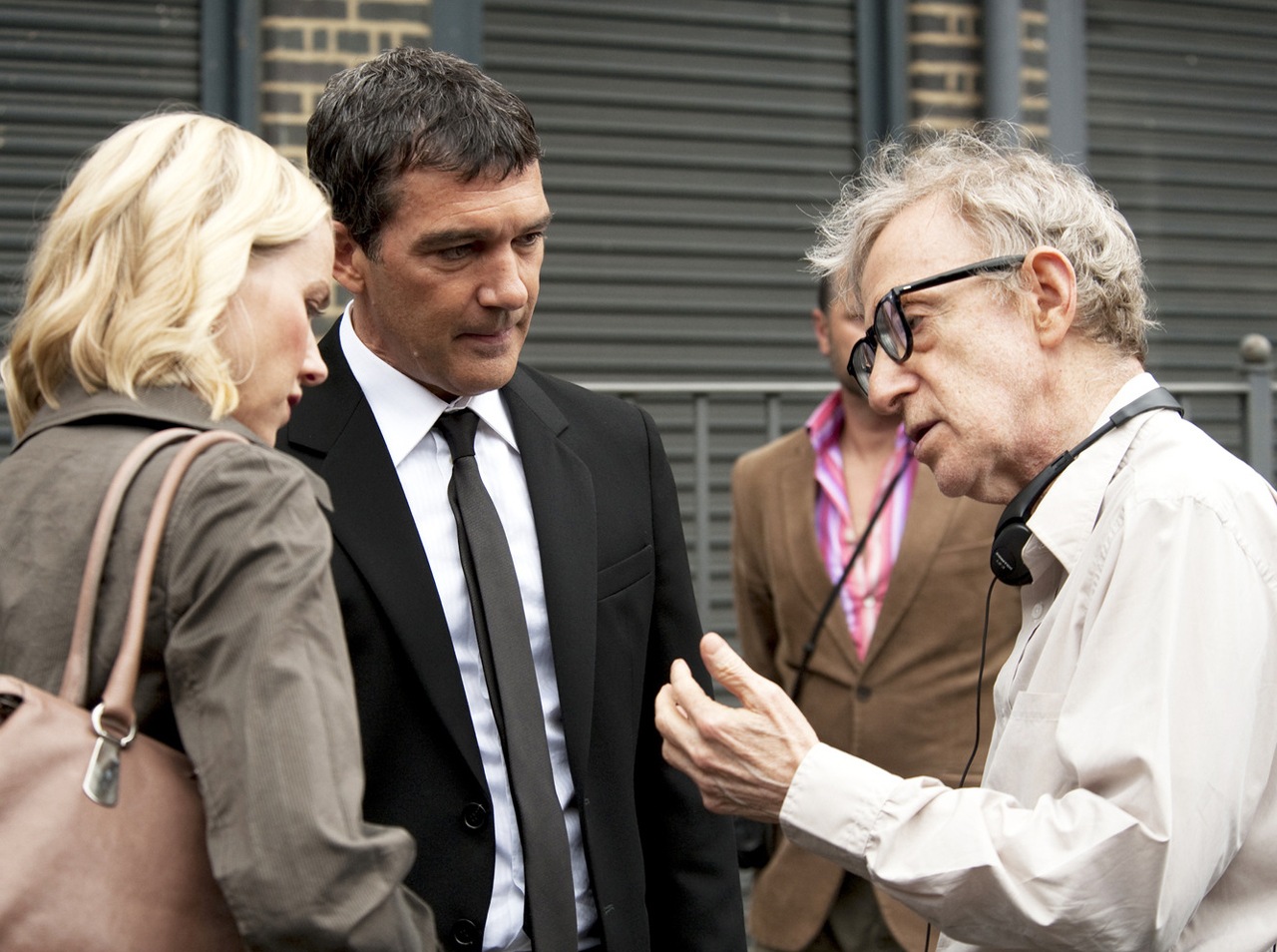 Woody Allen says each character in his new movie is searching for certainty in life, which he believes is impossible to acquire. "I thought originally of calling the film 'The Uncertainty Principle,' but I thought that would sound too much like homework for the audience and they would not show up."

In Allen's latest film, "You Will Meet a Tall Dark Stranger" ("a juicier title," he notes), two couples face dispiriting choices and look to self-delusion as a means of rising above the bleakness of depression, aging, marital strife, career problems and stifled romance. Yes, it's a comedy.

Anthony Hopkins leaves his wife of 40 years (played by Gemma Jones) and embarks on a journey of rejuvenation, which not surprisingly employs the services of a prostitute (Lucy Punch). Josh Brolin is a failing writer struggling to complete a novel that he hopes will satisfy the early promise of his career. His wife, played by Naomi Watts, is suffocating under the pressures of being the breadwinner and from her husband's incessant self-centeredness, and eyes her boss, an art gallery owner (played by Antonio Banderas) as a possible means of escape.

When Jones' psychiatric care proves unhelpful, she begins meeting with a fortune teller whose rosy forecasts give Jones hope to cling to, despite the family's acceptance that the tarot reader is a quack.

At a press conference in New York this week Allen accepted the film's similarities with his 1978 drama, "Interiors," and in fact suggested the theme was common to all of his films.

"The subject matter is still the same thing," Allen said. "The inability of people to relate to one another; people needing some kind of certainty in life; people deluding themselves into some sense that there is some purpose to life or that there is some extra meaning to life when in fact it's a meaningless experience.

"And yet, in the end, even faith in anything at all is better than no faith at all," he said.

Allen recalled a TV appearance years ago with the Rev. Bill Graham debating the meaning (or meaninglessness) of life. "Billy Graham was saying to me that even if I was right and he was wrong and there was no meaning to life and it was a bleak experience and there was not God and no afterlife and no hope for anything, then he would still have a better life than me because he believed differently," Allen said. "Even if he was 100% wrong, our lives would both be completed and I would have had a miserable life, wallowing in a bleak outlook, and he would have had a wonderful life confident that there was more.

"So that was one of the main themes of this picture, that someone like Gemma could be deluded (as I felt Billy Graham was deluded) and she would have a better life than someone like Josh who is more scientific-minded and had a more realistic view of life, but was going to have a more miserable life.

"I do feel that it's important to have some kind of faith in something, but impossible for many of us," Allen said. "I personally don't have any faith in anything. But it's great if you can."

Discussing one "deluded" character who appears, in the end, to have achieved happiness, Allen said they're due for a rude awakening. "Sooner or later, reality sets in in a crushing way, as it does, and will with everybody, including Billy Graham!"

Allen said that he combated his own bleak outlook with work.

"It's a great distraction, and it keeps me from sitting home and obsessing morbidly," he said. "If I just got up in the morning and had no place to go and was retired or something, I would sit there and I would be thinking the same thing that Anthony Hopkins thought of when he woke up in the middle of the night: Gee, what is the purpose of life? Why are we all finite? Why do we get old and die? Is there nothing out there? It's so tragic, why do our loved one perish? Why do we degenerate?

"Who wants to think about that stuff?" he exclaimed.

Instead, he worries about whether he can get the right actors to accept roles.

"These are all problems you can solve, it makes you feel that you can have some control of your life," he said. "And if you don't solve them, if it turns out Josh is wrong for the part or Lucy's wrong or Gemma is wrong, what's the worst that happens? You have a bad movie - but you don't die! That's why I keep making movies."

Since his first movie as a director (the 1966 dubbed-satire "What's Up, Tiger Lily?"), Allen has written and directed 41 films. He's won three Academy Awards (for directing and co-writing "Annie Hall," and writing "Hannah and Her Sisters"), and been nominated for 18 others.

"You Will Meet a Tall Dark Stranger" is Allen's latest to be filmed abroad, using London locations and veteran British character actors with aplomb. But the intimate story could be set anywhere.

Speaking about his working process, Allen said he disliked rehearsals, preferring his cast to just get on with it and trusting them to improve upon his lines.

"Josh wanted to play this part in a wheelchair - This is what you get when you're the director! It's crazy! Of course he can't play his part in wheelchair! You know, they're thinking about acting. They decide to play it as a hunchback and they're going to grow a beard, and they're going to do all kinds of things, affect a limp, so the less I speak to the actors, the better."

He said actors don't know why they are good. "They think they're great because they're doing all this extra work, when in fact when they wake up in the morning they're Jack Nicholson or they're Robert De Niro or they're Josh Brolin. It's built-in."

He had not met Naomi Watts before she arrived on set for her first day of shooting - in fact, her most emotional scene in the entire film. "I saw no reason to meet her," Allen said. "She had nothing to say to me; what am I going to tell her? She knows how to act. She read the part, she said she was going to do it, so she must know what it is.

"And she came in that morning, said hello, the usual exchange of insincerities - I adore all your films and all that nonsense - and then she had her hardest scene in the picture. And she came right in and did it. She was completely professional and great and for me that's the best way to work."

For his part, Brolin defended his wheelchair suggestion as a means of building on the part before stripping away the flourishes. "I create as much havoc as I possibly can before I go in there," he said. "I build this structure of unnecessary things so I can finally simplify, and feel like I've done something worthwhile with my life before I start.

"Part of it is starting a dialogue with Woody; I need to have that and I enjoy how much he dislikes it, it keeps me entertained," Brolin said. "I really enjoy the process, all joking aside, working with him, and as nihilistic as he sounds, he's very practical. You see him with his kids, there's a lot of bubbly life there, no matter what he says and the reputation that he has.

"I do think he loves his actors, and he doesn't accept falsities," Brolin said. "And I like being around that, whether it be Oliver Stone or the Coens or whatever, I've gotten used to and very spoiled working with filmmakers who don't accept false. And Woody is the simplest in that way. He doesn't complicate anything on the set. He wants to go to dinner, so within five takes get it right or you may be fired. And there's a wonderful reality to that because it's very blue collar experience."

Gemma Jones, whose credits run from the 1970s TV series "The Duchess of Duke Street" to "Harry Potter," said she responded well to Allen's directorial style even though, she said, "he doesn't say very much.

"But that gives you a kind of confidence, and I really responded to that and enjoyed it hugely."

Lucy Punch said she'd been unemployed for a year before auditioning for Allen, and had to fend off her mother's helpful suggestions that she take up some other craft, like podiatry. "I hate feet! I don't know what she was thinking," she said.

Punch recalled Allen said he'd make sure her mother was proud, and invited her to improvise about her character. "He gave me a huge amount of freedom," she said.

"You Will Meet a Tall Dark Stranger" opens in New York and Los Angeles on September 22.