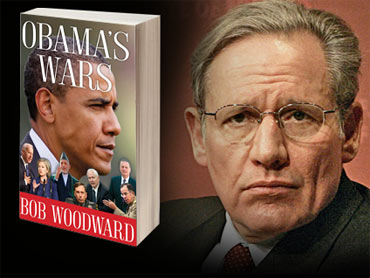 President Barack Obama's focus on an exit strategy for the Afghanistan war is an indication he is" out of Afghanistan psychologically "according to author Bob Woodward, whose recently released book "Obama's Wars" offers an inside look at the often contentious decision-making process behind the president's wartime strategy.

"The president's committed to 30,000 more troops into Afghanistan but in these secret meetings in the Situation Room in the White House, he repeatedly says, 'We need a plan to get out. There can be no wiggle room. I'm not going to do 10 years.' He is out of Afghanistan psychologically and the question is, for a commander-in-chief, don't you have to be kind of the guy who's up there, 'Yes, we can, we're going to win?" Woodward said during an appearance on CBS' "The Early Show" Wednesday.

The book describes friction between the president's military and civilian advisors, with the military pushing for a 40,000 troop increase to combat the Taliban insurgency in Afghanistan and other administration officials, particularly Vice President Joe Biden, skeptical of a troop surge's effectiveness. In the end, Mr. Obama largely charted his own middle-ground course, adding 30,000 troops and setting a target date of July 2011 to begin the process of drawing down military forces.

Woodward, who interviewed Mr. Obama and other administration officials and reviewed records of key national security meetings, said he walked away from the process thinking "so much is unsettled" about the strategy.

One of the major factors in Afghanistan's turbulence is the porous border region between that country and Pakistan, which offers militants refuge from U.S. forces.

"The dirty little secret here that's not a secret is that the safe havens for al Qaeda and the Taliban are in Pakistan and so they've literally, there in Pakistan, the Taliban inurgent go back for R&R weekends then their trucks [are] being waved through by Pakistanis at their border checkpoints to go into Afghanistan to kill American soldiers," Woodward said.

"Early Show" anchor Harry Smith questioned Woodward about one of the criticisms he's faced after releasing the book - that the people who come off best in it are the one's who gave him the most access.

Well, I talk to nearly everyone in this case, including the president, and the vice president [and] secretary of defense have said they talked to me. The key to this in the spine of the book are these notes of [National Security Council] meetings, the documentation. So, it's not somebody's favored spun recollection. It is exactly what happened."