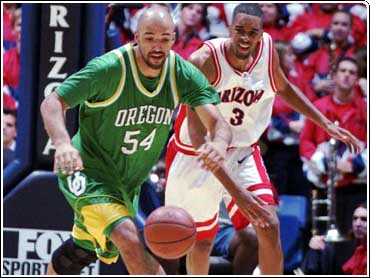 Loren Woods blocked three shots the first time Oregonhad the ball. He was just getting started.

"Loren sent a message on the first possession," Arizona coach Lute Olson said. It didn't get through.

The Ducks kept coming, Woods kept swatting them away until he had tied the NCAA record with 14 blocks, and No. 9 Arizonapulled away over the final three minutes to beat the 23rd-ranked Ducks 77-71 Thursday night in a showdown of two of the Pac-10's leaders.

Woods also scored 16 points, 12 in the second half, and grabbed 10 rebounds for Arizona's first triple double since Damon Stoudamire had one against Oregon in 1995. It was the first triple double by a Pac-10 player since UCLA's Toby Bailey did it against Stephen F. Austin early in the 1995-96 season.

Woods, who had 10 blocks against Washington State earlier this season, equaled the NCAA mark set by David Robinson of Navy in 1986 and tied by Shawn Bradley of BYU in 1990 and Roy Rogers of Alabama in 1996.

"They were not afraid to bring the ball inside," Woods said. "They kept coming at me."

But Ducks coach Ernie Kent said his players were too timid once they got the ball inside.

"I didn't think we came at the him with any intensity," Kent said. "It was more of a finesse game. You can't play him that way. You need to play a power game."

The Ducks had only one field goal over the final 6:06A.D. Smith's 3-pointer that put Oregon up for the last time, 71-69, with 3:46 to play. Arizona scored the final eight points of the game.

Alex Scales led Oregon with 18 points but fouled out with three minutes to play. Smith scored 16 points and Anthony Norwood added 11 for the Ducks.

Michael Wright had 20 points and nine rebounds as Arizona consistently pounded the ball inside in the second half. Gilbert Arenas scored 15 points and Jason Gardner added 10 for the Wildcats.

The Wildcats were 27-for-36 from the free throw line, compared with Oregon's 2-for-3.

"For Arizona to shoot 36 free throws, while we shot three, and we still had a chance to win. Well, that says a lot about our team," said Kent, who is 0-5 against Arizona.

The Ducks stayed in it from 3-point range, going 9-for-25 compared with Arizona's 2-for-9.

Gardner, who struggled through a 1-for-7 shooting night and is 2-for-17 in his last two games, made one of two free throws to tie it at 71-71 with three minutes to play, then made four in a row from the line over the final 23 seconds to clinch it.

Woods' 14th block came on Freddie Jones' drive with 45 seconds to play. Oregon put up a flurry of 3-point tries after that, most of them by Jones, but couldn't connect. Jones finished 1-for-11 from the field, 0-for-5 on 3-pointers.

Oregon led by as many as five points in the second half.

Woods already has broken the Arizona record for blocked shots in a season with 90. The old mark of 84 was set by Anthony Cook in 1987. Woods is on track to break Mario Bennett of Arizona State's Pac-10 mark of 115.