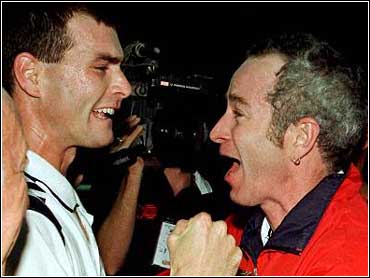 John McEnroe ran to embrace Chris Woodruff, silencing the pounding drums in the stands. There were tears in McEnroe's eyes, his first test as Davis Cup captain complete.

"I've aged like five years in a week," McEnroe said.

But in his flight home out of Africa, an exhausted and wiser McEnroe leaves a winner. With Woodruff and Andre Agassi delivering two gritty victories, the Americans beat Zimbabwe 3-2 Sunday to advance to the second round.

The United States entered the final day trailing 2-1. First, a weakened Andre Agassi so sick from the altitude and humidity he vomited on the court defeated Byron Black 6-2, 6-3, 7-6 (4) to even the matches.

Then it was left to Woodruff, a Davis Cup rookie who was stiff and shaken in his opening loss Friday. This time, Woodruff held up under immense pressure, beating the other Black brother, Wayne Black, 6-3, 6-7 (2) 6-2, 6-4.

After his 15th ace ended the match, Woodruff flung his racket in the air hugged by McEnroe, mobbed by teammates. The 4,000 cheering, drum-pounding Zimbabwean fans suddenly turned quiet, the prospect of their great upset gone.

The Americans will be on more familiar turf for the next round, playing at home against the Czech Republic in April.

On Sunday, McEnroe seemed far more jittery than he ever was during his magnificent career as a Davis Cup player He popped out of his chair to argue line calls. He shouted encouragement to Woodruff. He punched the air when Woodruff hit winners.

At one point, just like old times, he received a warning for foul language. Wayne Back called McEnroe's behavior "disgraceful."

"Hopefully, that will be the last one," McEnroe said of the warning. "But don't bet your life savings on it."

Agassi watched the end of the second match on TV from his hotel, where he was recovering.

"I'm so proud of the team and the way they left their hearts on the court," he said.

Only three other times had a U.S. Davis Cup team rallied to win from a 2-1 deficit. The previous time was in 1981 against Mexico, when McEnroe was on a team coached by Arthur Ashe.

The Americans, in their first Davis Cup matches in Africa, faced a rough road on Sunday after Alex O'Brien and Rick Leach lost the doubles in five sets to Wayne Black and Kevin Ullyett.

That left the Zimbabweans one victory shy of prevailing in a confrontation Zimbabwe President Robert Mugabe likened to "dwarfs against the giants."

The United States had Agassi in the openinsingles, and no one in the world is playing better tennis at the moment. But while that victory seemed secure, Woodruff remained the big question mark.

Woodruff, ranked 37th in the world, was coming off a strong Australian Open in which he lost to Pete Sampras in the quarterfinals. Only now the stakes were higher he was playing for his country, with McEnroe stalking the sideline.

But even that one sure thing Agassi's victory on Sunday did not come easily.

Cramped and dehydrated, he vomited into a box behind a line judge's spot. After his victory, he left without his trademark bows to the crowd. In the locker room, his cramping and vomiting persisted.

Harare's near 4,000-foot altitude is the highest Agassi has ever competed in. He arrived in the capital last Monday, a day after winning the Australian Open.

But for all his debilitated state, Agassi was still able to apply his powerful ground strokes in sweeping Zimbabwe's top-ranked player.

This was Agassi's second singles victory of the series. On Friday, he beat Wayne Black.

He was clearly the strength of an American team that was unable to turn to Sampras, who hurt his hip in the Australian Open, or Todd Martin , who was sick.

McEnroe dedicated this series to Ashe, who died of AIDS seven years ago on Sunday, and to tennis great Don Budge, who died last month at 84. It was a poignant dedication in a country ravaged by an AIDS epidemic.

For Zimbabwe, the matches signaled that this country can be a factor in the Davis Cup. Last year, it trounced Chile and Marcelo Rios. This time, it nearly knocked off the United States.

"We were so close," Wayne Black said. "And it's a great disappointment."

In other upcoming quarterfinals, it's Russia at Spain, Slovakia at Brazil and Germany at Australia.