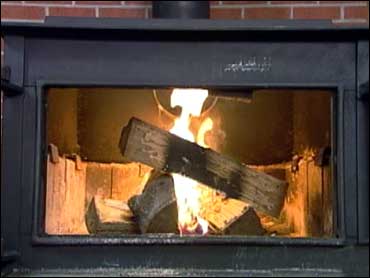 With oil and gas prices soaring, more Americans are using wood-burning stoves to heat their homes — but owners can be in big trouble if they aren't careful.

says
the stoves can save their owners big bucks, cutting heating bills by up to 30 percent.

But safety experts warn that you need to get the facts before you buy one because the devices can be a hazard in your home.

At a Lowe's store in Gainesville, Va., wood stoves are on fire.

"It's Christmas time, and they're more popular, they're flying out the door faster than the Christmas trees this year," manager Garry Smith tells Koeppen.

But as sales skyrocket, so do concerns about the safety of the stoves.

On a cold night last December, Cindy Kuehn fired up the wood stove in her Tinley Park, Ill., home and flying sparks lit a nearby couch on fire.

"There was so much smoke," she says, "it was so thick, we couldn't even make it down the hallway. It kicked me back, I literally couldn't breathe."

Kuehn grabbed her family and ran out of the house but didn't realize her autistic son, Nathan, was still inside. When firefighters pulled him out, he was unconscious.

"He had severe smoke inhalation," Kuehn says. "I was really sure he was dead, there was no doubt in my mind."

But Nathan survived after spending a month in the hospital.

He was one of more than 5,000 people sent to emergency rooms last year because of wood stove accidents. Safety experts fear there will be even more injuries and deaths from wood stoves this year.

"It's so preventable," laments Meri-K Appy, who's with the Home Safety Council.

She stresses that picking the right kind of wood is "essential. You want seasoned hardwood, wood that's been kept dry outside six months at least. You want wood that burns with the least amount of smoke and the least moisture content, because that prevents buildup in your chimney, and that's what tends to catch on fire with a wood stove."

Safer woods include oak, hickory and ash. Avoid burning pine and cedar. But any wood can create dangerous sparks, like those that caused the flames in the Kuehn house.

That, says Koeppen, is why having a screen is critical.

A flame-resistant carpet underneath also helps, Appy says, as does moving everything away that can catch fire, including furniture, toys and draperies. "You want to have a good, clear space around your wood stove," she says.

Appy also suggests keeping a fire extinguisher close by, and putting a carbon monoxide detector at least 10 feet away. A gate to keep kids and pets away is also a good idea.

"Wood stoves have hot surfaces," Appy says, "so there's a real risk of a contact burn, so just as you protect your stairwell if you have toddlers in the home, put up a gate around this hot surface too."

But the biggest wood-stove hazard? Chimney fires. Appy says that byproducts from the smoke can build up inside your chimney and ignite. She urges consumers to "get a licensed professional to come inspect your chimney and clean it once a year or when needed."

Kuehn wishes she had taken more precautions with her wood stove. She wants other families to get the facts about wood stoves before a tragedy occurs. "When it does," she says, "it happens so quickly, you don't have time to think."

Koeppen offered more do's and don'ts. Do have a professional install your wood stove, or have it inspected if you do it yourself. Dump the stove's ashes in a metal bin with a cover, outside, away from any wood decks and your house. Ashes can remain hot up to a week after they're created. And don't burn artificial logs, trash or wrapping paper from the holidays in them.