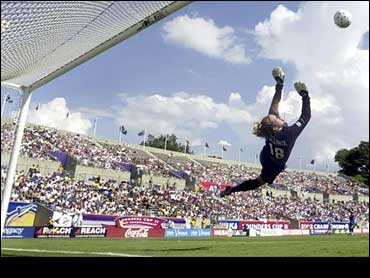 At first glance, the scene on a recent Saturday night on the University of San Diego campus seemed to showcase all that is right about women's professional sports.

In the stands of cozy Torero Stadium, little girls in soccer jerseys squealed in unison when their favorite San Diego Spirit players were introduced. On the field, two of the top teams in the WUSA were engaged in a lively contest.

As the sun sank toward the Pacific Ocean and the night became chilly, the Spirit got a late penalty kick from Julie Foudy to tie Atlanta 1-1. Soccer moms and dads bundled up their kids and headed home happy.

Beneath the idyllic setting, though, all is not well in the WUSA, which was founded in the giddy euphoria of the 1999 women's World Cup with Foudy and 16 other U.S. team players holding a small equity stake.

Now in its third year, player salaries have been slashed, TV ratings are almost nonexistent and the league is having trouble finding fans who aren't under 18 and play on a soccer team.

Things aren't much better in the WNBA, which narrowly escaped its demise this spring after NBA owners threatened to pull the plug in the absence of a new labor contract. A new deal was eventually reached that keeps salaries capped at $622,000 a team, but even so, the 14-team league will lose at least $12 million this year.

Attendance is stagnant in WNBA arenas, teams in Miami and Portland folded, and the league can't seem to expand its fan base. NBA commissioner David Stern remains a supporter, but there are rumblings among some NBA owners that the women's league has run its course.

"I couldn't afford the Jazz if nobody came to a game," Utah Jazz owner Larry Miller said when the Utah Starzz moved to San Antonio in the offseason after averaging only 7,240 a game. "It's the same situation with the Starzz. We tried everything we knew how."

Indeed, it's not for lack of trying. Since 1996, when the Altanta Olympics served as a showcase for female athletes, promoters have launched five different women's professional sports leagues, ranging from softball to volleyball. Three have folded, and the two that remain are hanging by a thread.

And that doesn't include two women's semipro football leagues, where most players pay to be on the team and whose games are watched mostly by relatives and boyfriends.

A quarter century after Title IX opened a new wave of college opportunities, the jury is still out on whether women's pro teams can carve out more than the small niche they occupy in the multibillion-dollar sports business.

Women's tennis and golf do well at times, although the LPGA Tour always suffers in comparison to the riches of the men's tour. And every four years at the Olympics, women's figure skating and gymnastics are two of the most popular sports.

But women's sports leagues are proving a hard sell, especially now, long after the excitement of the 1996 women's basketball Olympic gold medal and the 1999 women's World Cup soccer win before 90,000 fans in the Rose Bowl.

The eight-team WUSA debuted in April 2001 with a Washington Freedom game that drew 34,148 fans, a number that has not been seen since. More troublesome for the league is that last year's average attendance dropped to 6,957 from 8,116 the season before.

"We're being very patient in how we manage our expectations of growth," said WUSA president Lynn Morgan. "The league is making progress and improving, but we have a long way to go."

Women's pro sports had an uphill battle from the beginning, forced to overcome cultural and gender obstacles to build leagues from scratch in an increasingly fragmented market.

They've had to do it with little in the way of TV revenues that are the backbone of major men's sports, relying instead on sponsorships and attendance. And they've had to do it for the most part without men, who may be avid sports fans but not when it comes to watching women playing them.

"Women's professional sports are the new people on the block. They have to capture their audience," said Neal Pilson, a TV sports consultant and former head of CBS Sports. "They don't have the residual audience of men's football, basketball and baseball. It's a difficult environment out there."

That was evident on the recent night in San Diego, a soccer friendly town that would seem to be a natural for the WUSA. But only 4,911 fans showed up in the 7,000-seat stadium to watch, the smallest crowd in the three-year history of the team.

They came in clusters, moms with little girls jumping about and fathers with several kids in tow. They got their faces painted, gawked at $85 Julie Foudy jerseys, feasted on cotton candy and banged their cheer sticks together.

But there were big chunks of vacant seats and few Hispanics in a border city that teems with soccer fans. It was an indication that the appeal of women's pro soccer perhaps may be limited to a core of soccer moms and dads and their little girls.

"We do great on families and young kids, but we have a hard time getting 30-year-old guys to come to games," said Foudy, one of the league's charter players.

The league's own statistics bear that out. Seven of 10 fans at a WUSA game are female, and a whopping 89 percent of fans under the age of 18 at the stadium are girls.

A league that began with hopes of winning over America now seems resigned to marketing to its core fan base.

"Our primary target is definitely still the young soccer player and her family," Morgan said.

It's not just women's soccer that men don't seem to want to watch.

Surveys by New York-based Scarborough Sports Marketing show that only 4 percent of men say they follow women's soccer even casually, while just 6 percent have an interest in the WNBA. The LPGA fares a little better at 8 percent, but it's had a half-century to build even that audience.

By contrast, 31 percent of women say they are NFL fans and 28 percent say they follow major league baseball.

"They know they can't get men interested. Men compare it to the NBA, and it's a different level. So they try desperately to pitch it to women," said boxing promoter Bob Arum, who has had his own problems trying to promote women's boxing. "You go to these games and the vast percentage of people are women and girls ... but there's not enough of them."

On this night, at least, the men were just over the hill, part of a crowd of 31,375 that was watching the Padres play the Diamondbacks at the same time as the soccer game.

There, they could see millionaires play other millionaires. On the Spirit squad, lower tier players make as little as $30,000 for the season.

Many felt lucky just to be playing for pay. The WUSA spent so much money its first year that it nearly shut down. It moved its headquarters from New York to the Atlanta office of sponsor Cox Communications and dug in for the long run, determined to run a leaner operation.

"The economy isn't helping us at all. You can feel it from the top down," Foudy said. "The idea now is to go lean and mean and ride through these few years of economic woe and hopefully see the upside of it."

That also seems to be the plan in the WNBA, where attendance is averaging just over 9,000 a game, down from the league's high-water mark of 10,869 it drew during its second season.

Filling seats is critical for both leagues because they get little in the way of TV revenues, forcing them to rely on sponsorships and ticket sales.

In the WNBA's first year, NBC got a 1.9 rating for league games, but by last year that rating had fallen more than half to a .9. Some games are on the Oxygen cable network, while the WUSA is shown mainly on local cable and on the PAX network.

That's not necessarily a problem women's sports face alone, though.

"The problem with TV now is the huge number of options and choices available to television viewers," Pilson said. "It's not just the WNBA declining. Most sports properties have seen declining ratings the last five years. The NBA numbers have declined and no one is finding fault with men's basketball."

With no rights fees to speak of, the leagues must relay on getting women who may not be avid sports fans to buy tickets - a task that has proved more difficult than imagined.

"Women in general aren't accustomed to buying season tickets. They haven't supported sports as spectators," said WNBA president Val Ackerman. "We have to work harder to show them the benefits of season tickets and show them not only the basketball side of the equation but the people side."

The same night the Spirit were playing, the Sacramento Monarchs opened their home season to a full house of 17,317 and high expectations.

"Things looked somewhat bleak this offseason with the contractual problems and teams folding," said Monarchs coach Maura McHugh. "If we can survive all this, I think that's a great start. To go through so much adversity, we'll get stronger."

Though the Monarchs packed the house for opening night, a few nights later at Seattle, only 4,528 fans came out to watch. In both crowds, it was easy to see why the WNBA still has problems making a breakout.

While the WUSA crowds are 70 percent female, the average WNBA crowd is 78 percent women.

Some WNBA teams, including Los Angeles and Seattle, have reached out to the lesbian community - a marketing strategy that may not work with some parents or in more conservative markets.

The leagues are hoping they can draw people such as Wendy Buckley-Stokes, who brought her 6-year-old daughter, Elainee, and 5-year-old son, Jacob, to the Monarchs' opener.

"Last year there weren't a lot of people here," Buckley-Stokes said. "It was disappointing, but hopefully this year there will be more fans. If you have strong owners it will survive."

Buckley-Stokes said seeing women play professional sports is a good influence on her daughter, who was wearing a No. 21 Ticha Penicheiro jersey.

"I just like it," Elainee said. "I think I'll be a teacher and play basketball."

The girls at the basketball and soccer games are critical to the WNBA and WUSA - but only if the leagues can survive long enough so those girls can someday buy their own tickets.

"That's what's going to be huge if the league is around in 10 or 15 years," said Monica Gerardo, who left the WUSA this year to become an assistant college coach. "Those little kids who are screaming in your ear all game long ... they will be 30- to 35-year-olds coming to the games."

And if the number crunchers aren't so optimistic, the players seem to be.

"The future of the league is so bright," said Monarchs forward Demya Walker, a fourth year WNBA player. "Every league goes through growing pains and its ups and downs. I don't see the WNBA going down anytime soon. I see it going up and up."