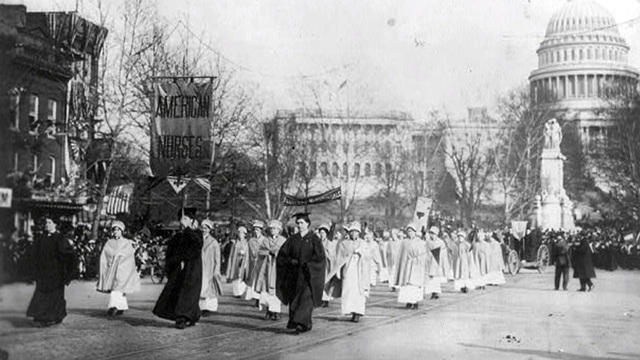 Just a few blocks from where President Trump took the oath of office one day earlier, a very different gathering of the masses was planned for Saturday. Hundreds of thousands of people are demonstrating to protect rights many women feel could be in danger.

“The message of the march is that diverse groups of people will be coming together to say that our voices must be heard,” Mallory said. “We need to ensure every level of government that’s in this city understands that women’s rights are not to be played with.”

At least 200,000 are expected to march up Independence Avenue -- a four-mile stretch running along the National Mall from the Capitol to the Lincoln Memorial, just south of the White House.

They follow a long tradition of Americans marching to have their voices heard.

“All of you have had a lot of experience in public protest. What sets this event apart from those?” Wagner asked.

“This is an ultimate grassroots effort. This is absolutely a moment to send a message that ordinary people -- the mom, the teacher, the social worker -- can organize in a way that people haven’t been able to in a very long time.”

“It is the place where the Constitution comes to life,” said Mike Litterst of the National Park Service, which grants nearly 3,000 permits for protests each year.

“When it comes to evaluating what groups get permitted and what groups don’t, can you tell me a little bit about how that assessment works?” Wagner asked.

“We make no requirement on messaging or we don’t censure the content. So any group... who requests a First Amendment permit is granted one,” Litterst said.

Litterst told us in any given inauguration, they’ll receive no more than a half-dozen permits requests. This year, it was 30 – a five-fold increase.

For more than 100 years, Washington has hosted marches from groups ranging from the Klu Klux Klan to the supporters of the suffrage movement.

“It’s become the thing that you do if you have a major sort of cause,” historian William Jones said.

But Jones said the first Americans to protest the federal government marched to Washington, when Ohio businessman Jacob Coxey led a group of 100 to the Capitol steps in 1894.

“Coxey’s army was demanding work. It was a work protest, and so there were a series of these sort of unemployed marches, work marches, particularly in the 1930s,” Jones said. “So people actually marched for a very long distance. They were all just kind of... greeted with repression, and I think that’s what really shifted in 1963 with the March on Washington.”

That march would forever change the public’s imagination.

“In the early days, it was almost a threat. It was not a good thing coming to Washington to take a stand. How did that change?” Wagner asked.

“You woke up in the morning and you read in the news that this is actually much bigger than anybody anticipated, a quarter-million people showed up, there was not one instance of violence, and there was this sort of shock,” Jones said.

From Vietnam to Iraq, prayer vigils to rallies for reproductive rights, conservatives led by Glenn Beck and Sarah Palin to those led by Jon Stewart and Stephen Colbert, Washington has hosted them all.

“Why does it matter to have public protests in this particular moment?” Wagner asked.

“Because it’s always mattered to have public protests and right now we need people who are coming from all walks of life to stand together to say that the will of the people will always stand,” Mallory said.