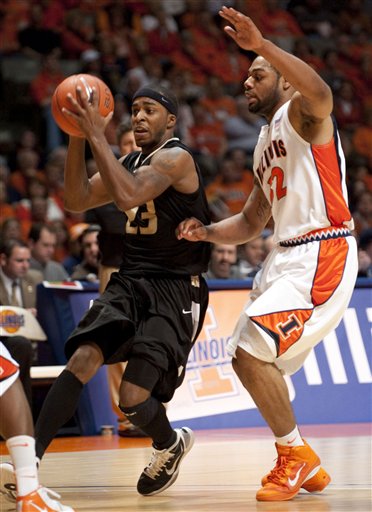 (CBS/AP) When the shots weren't falling for the Illinois Fighting Illini basketball team, the players blamed the ball. Turns out they were right. For the first seven minutes of last night's game in Champaign against Oakland, the teams were playing with a women's ball.

As Illinihq.com reported, center Mike Tisdale found the evidence and alerted officials. "Everybody was joking about it, saying the ball is not normal. Finally I saw the '6' on there and I knew something was wrong, so it was a little weird," Tisdale said.

Play quickly restarted with a size 7 men's ball - about an inch larger and 2 ounces heavier - but neither team's shooting immediately improved.

Oakland struggled most of the half to hit from outside - and missed wildly on many shots - but rode second-chance baskets from close range to a 28-24 lead.

Illinois was 10 of 32 in the first half and just 1 of 8 from 3-point range, and those numbers improved drastically after the first 9 minutes. The Illini had just 11 points with 9:23 to play and were down by nine.

The Illini eventually pulled away from the underdog Golden Grizzlies in the second half to win 74-63.