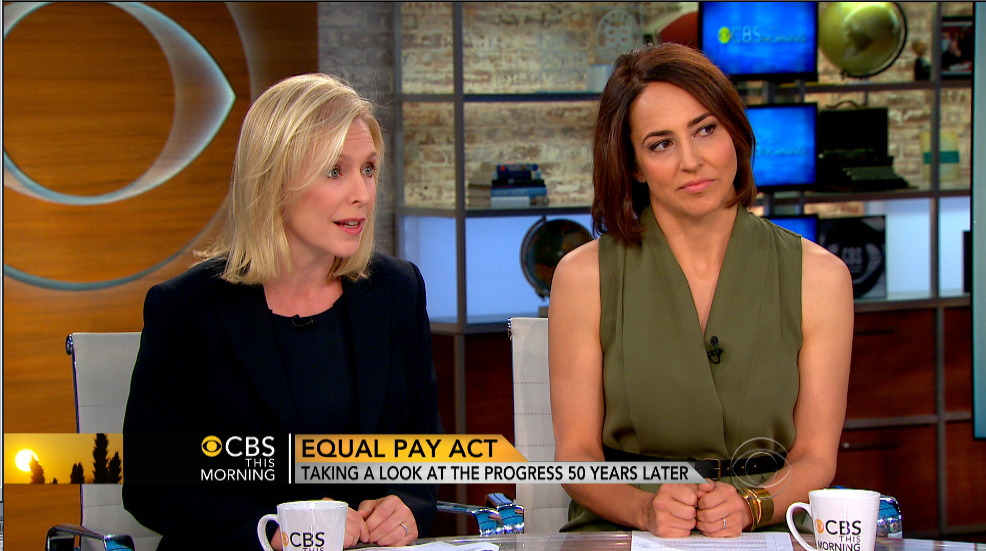 (CBS News) Monday marks the 50th anniversary of the Equal Pay Act, which was a law signed by John F. Kennedy and intended to ensure pay parity for women.

Unfortunately, five decades later, women still earn an average of 77 cents for every dollar earned by a man. For African-American and Hispanic women it's even lower: 64 and 54 cents, respectively.

The disparity led Sen.r Kirsten Gillibrand, D-N.Y., to co-sponsor an update to the law, called the Paycheck Fairness Act, along with a number of other female senators.

On June 5, the Senate failed to secure the 60 votes needed to pass the Paycheck Fairness Act. Gillibrand believes that this setback was a result of politics.

"We are really undermining the ability of our economy to truly take off by holding our women back through a lot of these structural impediments like having a minimum wage that's $3 below the poverty line," she said.

The difference in pay is a subject that Anne Fulenwider, editor-in-chief of Marie Claire covers in an extensive feature investigating pay parity for women, entitled "Level the Paying Field," in the magazine's June issue. She told "CBS This Morning" that her research showed it wasn't just in certain fields that women made less, but across the board.

One of the main reasons this happens is that women do not negotiate a salary in the same way that men do because they think of it as a confrontation, when it should be a conversation.

She explained that when offered a job, only 7 percent of women will negotiate their incoming salary, while more than 55 percent of men will take that extra step.

Both Gillibrand and Fulenwider said that this is not just a women's issue and it is important to educate people on how equalizing pay will help stabilize the middle class and therefore the U.S. economy.

"It's really about the middle class because you have to get 100 percent of your work force engaged in being able to do the jobs that they're qualified to do," said Gillibrand.

Rare images of The Beatles