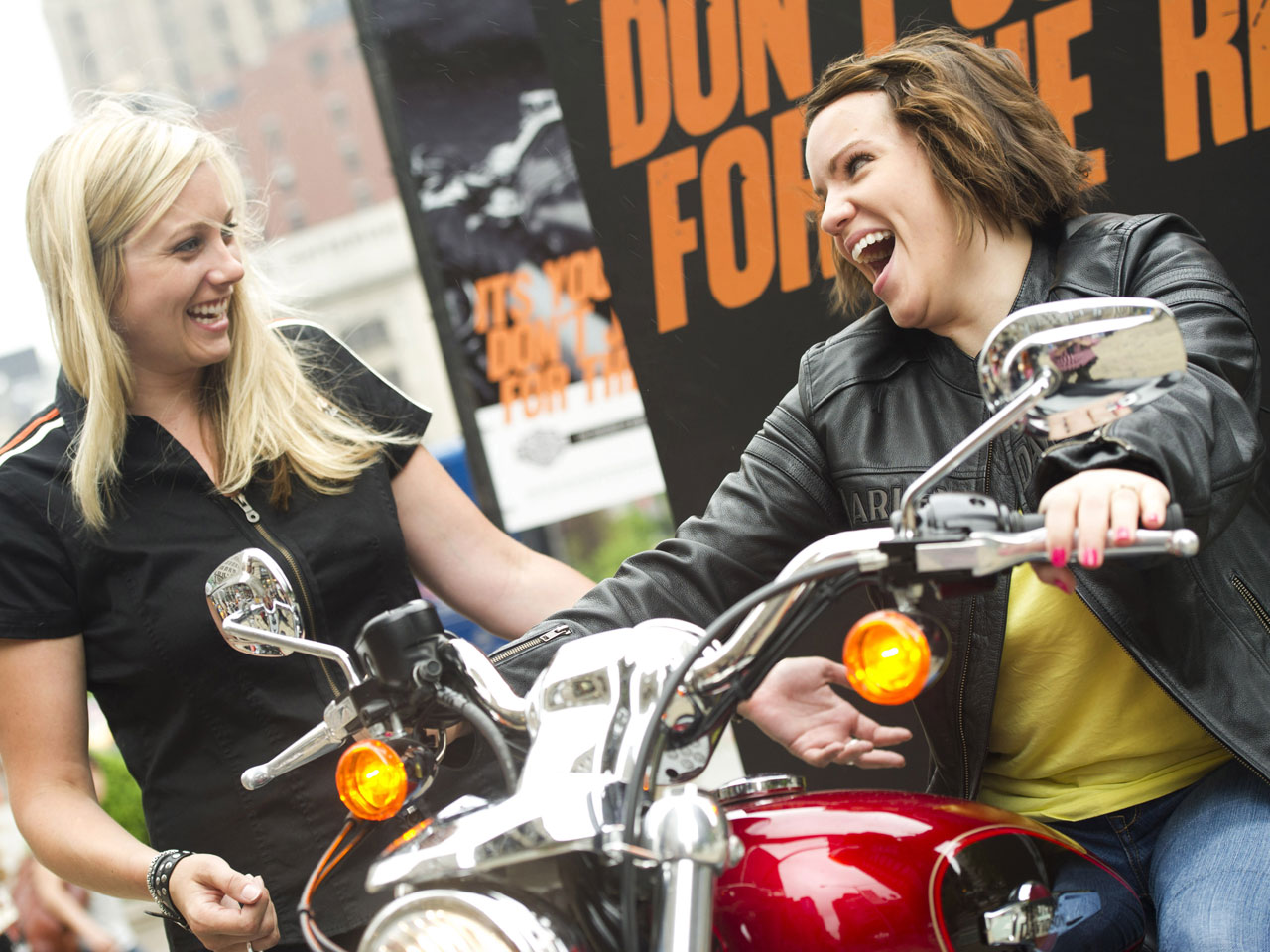 (AP) NEW YORK - Cris Baldwin was 7 when she commandeered her brother's minibike on their Wisconsin dairy farm and first felt the wind in her face. More than 250,000 miles and 42 years later, it's still two wheels and a gas tank for the school administrator.

Baldwin is an assistant dean at Washington University in St. Louis, but that's just one part of her. She's also past president and a chapter founder of the 30-year-old Women on Wheels, one of the country's oldest and largest motorcycle clubs for women at about 2,000 members.

"It really is freeing from your day to day obligations, enjoying the moment, not thinking about bills or sending kids to college," Baldwin said. "I wouldn't trade it for anything. It's my two-wheel therapy."

The number of women motorcycle operators in the U.S. has increased slowly to about 7.2 million of about 27 million overall in 2009, according to the latest survey by the Motorcycle Industry Council. About 1 in 10 owners are women, said Cam Arnold, a vice president for the trade group.

"I hate riding on the back of a bike," Arnold said. "It's a lot more fun being in control."

The American Motorcyclist Association has about 225,000 members. The number of women is under 10 percent, but the number of new women members has increased, driven in part by a higher profile for women on two wheels, more training opportunities and better equipment, said AMA board member Maggie McNally.

Dozens of female-only motorcycle clubs have joined more established groups like Women on Wheels. The makers of bikes and gear are reaching out to women like never before through special events and marketing campaigns that include Harley-Davidson's "No Doubts. No Cages." program.

Women no longer have to endure jackets, gloves and helmets designed for men. And it's easier to find or modify bikes for shorter bodies, said McNally, the AMA's vice chairwoman and the highest-ranking female in the group's 75-year history.

"I'm only 5'1"," she said. "I wore boy's work boots for years and found the perfect gloves only three years ago. Things have changed a lot. Manufacturers today have realized that women are a huge part of the market."

McNally started riding in 1981 after hanging out with friends, thinking up dream cars, in a Troy, N.Y., parking lot, the same parking lot where she now teaches newbies of both sexes how to ride safely.

"I said that I wanted to get a motorcycle and one of the guys said, `You can't, girls don't ride motorcycles,"' she said. "I thought, `He shouldn't be telling a temperamental redhead what she can and cannot do.' I had my permit within a week."

Whether they prefer dirt or the open road, a scooter or a Harley, thousands of women will gather July 26-29 in Carson City, Nev., for the AMA's sixth International Women & Motorcycling Conference. Many will be mothers, an anxious status for some when it comes to riding.

"People were shocked that I didn't sell my bike when I became a mom," McNally said, "but I knew that once the bike was gone, I might never get back into the sport."

When her second child came along, she and her husband bought a sidecar. "Riding and motorcycle camping became a family activity that probably wouldn't have been possible otherwise," she said.

Baldwin is a mom who rode. So did her 23-year-old daughter, until she gave up two wheels for four when she got her driver's license years ago.

At 5'3" and about 150 pounds, Baldwin's ride is a 700-pound Harley "clone" designed and built by her husband. Her mom, now 69, was an inspiration, tearing around their farm on a Honda trail bike.

"She gave up riding because she couldn't find other women to ride with. And my dad was totally against it," Baldwin said.

Nancy Sabater in southern Maryland is an off-roader and a street rider. She was chosen as AMA's motorcyclist of the year in 2011 for fighting against a federal anti-lead law written so broadly as to ban dirtbikes and ATVs intended for kids 12 and under. President Obama fixed the law last August.

Sabater, who has been riding for about 20 years, will be among numerous speakers at the Carson City conference. Riding off-road is her first love.

"It's definitely about skill, pushing my own limits, trying to climb a hill, trying to get through a tricky rock section, that kind of thing," she said.

Women are generally more interested in formal safety training than men, with 58 percent of women taking a rider course, compared with 44 percent of men, according to the AMA.

Harley-Davidson, based in Milwaukee, is the market leader in sales to women. The company travels around the country offering training and safety tips for women, including a recent event outside Manhattan's Flatiron Building.

"We've heard from enough women who think they might like to do it but don't know how to get started," said Claudia Garber, director of women's outreach for Harley. "They're worried about things like the bike seems too big and too heavy for me, or maybe I don't know other women who ride."

Roshani Dubel, 33, an eighth-grade math teacher and mother of three in Gilbert, Ariz., was more than ready, but she had to face those fears after winning an essay contest telling Harley why she wanted to learn to ride. She and three others were flown to Milwaukee for mentoring and training last summer.

A video documenting her struggle shows her breaking down emotionally as she tries to walk the bike back and forth. "I'm 5 feet tall. I kept thinking to myself, `How am I going to ride if I can't even walk this monster?"

Things clicked eventually. She's logged more than 800 miles on her Harley since, cheered by her students and fellow teachers when she rolled up to her school on it for the first time.

Nancy Dilley, 68, of Overland Park, Kan., may never get there, but she sat astride a Harley as she learned the basics while the rear tire spun safely on a platform during the company's event at the Flatiron.

"I had an uncle and he had a big Harley. I was his favorite passenger because nobody else ever wanted to ride with him," she said. "We'd go all over out in the country riding, but once I got married and had kids I didn't want to do it anymore. I felt I had too much responsibility."

Will that change now that she's had a taste of what it feels like up front? "I'm kind of a chicken, but it was interesting," she said.

Lizzy Dabczynski, 22, from Salt Lake City, hopped on as Harley's experts showed her how to turn on their demo bike and work the clutch, gas and brakes.

"I've always been terrified of motorcycles, but it was fun," she said. "It was easier and way less scary than I thought it would be."