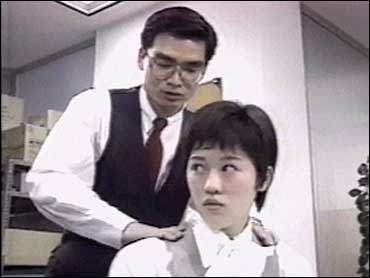 I'm Barry Petersen, and this Letter from Asia comes from Tokyo.

Japan is, without a doubt, the world's most polite society. At least – the part of the society that most of us see. But there is an unpleasant and often unspoken downside to this culture…how it treats women.

Miyumi Hirumo knows this better than most. She won Japan's first ever sexual harassment lawsuit…and lost her job in the process. Bitter? You bet.

"It will take 100-years to change Japanese Men," Hirumo says.

Which brings us to the place where women often feel most vulnerable and least protected…the subway. As the rental how-to video shows…men can exploit a certain anonymity on the subway.

"In crowded cars, men can get away with anything," one woman told me.

One company came up with the perfect answer…women only subway cars. Women, as you might expect, feel safer.

But here's the odd thing…a lot of men prefer this kind of sexual segregation as well…because they are afraid of new laws that make harassing women on trains an offense that can bring a year's jail sentence.

"They know that if someone raises the alarm, and they're under suspicion, they have no chance at all," another woman told me. "So they just clutch their briefcases with both hands."

Here, in the world's most polite society, you can call the women only subway cars a small victory in the battle of the sexes that was won the way any kindergarten teacher breaks up a playground brawl…not with reason, but by simply keeping the two sides…apart.