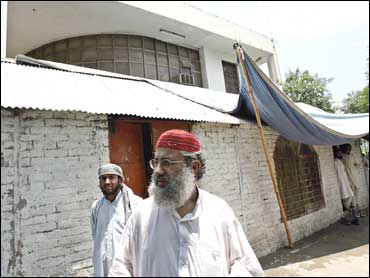 This story was reported by Farhan Bokhari, writing for CBS News in Pakistan.


Hardline Islamists on Saturday released six Chinese women and a Chinese man after keeping them hostage overnight on the charge that they were running a brothel in Islamabad, the Pakistani capital.

Dozens of students had seized nine people (including two Pakistanis) from a massage parlor in an upscale neighborhood of Islamabad shortly after midnight, police official Mohammed Naeem said.

Maulana Mohammed Ishaq, a cleric at the city's radical Red Mosque, said the nine had been brought to the mosque to teach them not to indulge in "anti-social activities."

For women to massage men was in any case "not allowed according to the values of Islam," Ghazi said.

Abdul Rashid Ghazi, one of two brothers who run the mosque, said foreigners "involve our youth in sex activity in the cover of massage."

The Interior Ministry said the abduction was a "shocking and unlawful act."

The case highlights increasing determination on the part of Islamists who occupied Islamabad's main municipal library in January and began testing the government's patience through highly provocative actions.

The Islamists have vowed to establish Islamic courts to hand down punishments in compliance with "shariah" (Islamic jurisprudence) and have threatened to establish squads to clamp down hard on vice and promote virtue.

Images of hundreds of Islamist women clad in burqa (head-to-toe black dress) have become a familiar sight for Pakistani newspaper readers and TV viewers. These women who are students of an Islamic madrassah (religious school) adjoining the municipal library, are pressing the government to rebuild mosques which were demolished in Islamabad for being built on illegally-occupied government land.

One of Islamabad's main mosques, known as the Red ("Lal") Mosque which also adjoins the municipal library, has additionally become a center for frequent issuance of tough calls seeking the imposition of Islamic norms. Maulana Abdul Aziz, the main preacher of the Red Mosque, in April stunned members of the western diplomatic community based in Pakistan when he publicly threatened to support suicide attacks if the government forced the Islamists out of the mosque, the women's madrassah and the municipal library.

Speaking to a crowd of about 3,000 worshippers following a Friday weekly sermon, Mr Aziz said, "The government has been saying that an operation against us is the last option. I want to tell the government that jihad (holy war) and suicide attacks are our last option."

On Saturday, Pakistani government officials and diplomats warned that the abduction of the Chinese who were kidnapped from a massage center that they ran in a posh neighborhood of Islamabad, demonstrated the Islamists were becoming increasingly bold.

Pakistan considers China as its most trusted ally and friend. China has supplied Pakistan with military hardware even when the south Asian country was under sanctions by the United States in the 1990s for its work to develop its nuclear bomb project.

"This action would bring some very adverse publicity for Pakistan in China," said a senior Pakistani official who spoke to CBS News on the condition that he would not be named. "The Islamists are actually delivering on some of their threats and the question for the government is, how long do you permit them to continue like this?"

A senior Western diplomat who also spoke to CBS News on the condition of anonymity said, "The position of the Pakistani government is being compromised every day. Each day this kind of defiance continues, there is bound to be the view that the government is helpless."

The premises of the mosque, the women's madrassah and the municipal library are located in central Islamabad, surrounded by a densely populated commercial neighbourhood known as Aabpara on one side and a residential neighborhood on the other. Pakistani officials said an operation conducted either by the paramilitary forces or the police will inevitably lead to high numbers of casualties, a fact that has restrained the government.

"There is bound to be lots of human collateral damage" in the event of such an operation, said the Pakistani official who spoke to CBS News.