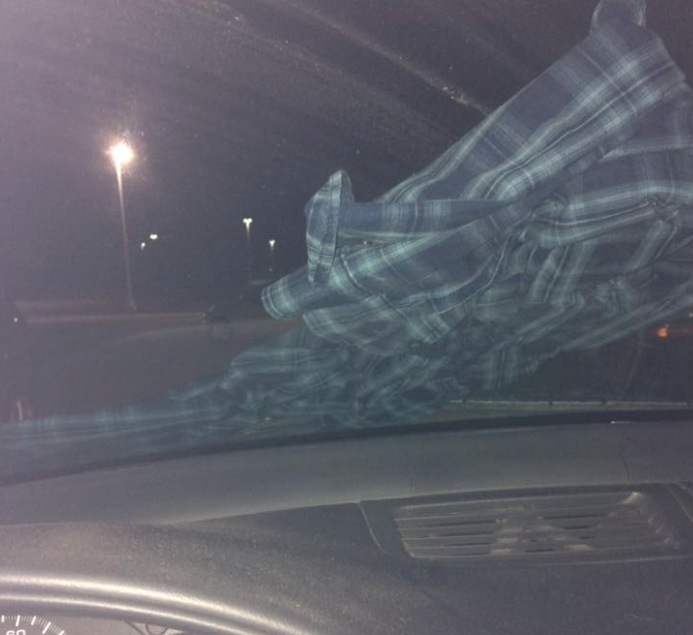 While getting into her car after work at Genesee Valley Mall in Flint, Michigan, Thursday night, Ashley Hardacre spotted a piece of bunched-up clothing sitting on her windshield. Someone had draped a blue flannel shirt over the glass and secured it under the windshield wiper.

But wary of putting herself at risk in a dark parking lot, the 19-year-old woman didn’t pause to remove it. Instead she got in the car, locked the doors and drove away. Now she’s encouraging others in similar situations to follow her example — in a message that has gone viral on Facebook with nearly 90,000 shares.

“There were two cars near me and one was running so I immediately felt uneasy and knew I couldn’t get out to get it off,” Hardacre explained in the post. “Luckily, I knew better than to remove the shirt with cars around me so I drove over to a place where I was safe and quickly rolled down my window and got the shirt off.”

Hardacre told CBS News her mother warned her about potential tricks people could use to lure women out of their cars.

“I posted about the incident to inform others that it can happen to anyone and that they shouldn’t fall for it,” Hardacre said. “A lot of people think it is fake or it won’t happen to them. But you can never be too safe.”

But he assures residents that it’s not a common practice, at least not in the Flint area, and is no cause for panic.

“Nothing like this has ever happened before,” Wangler told CBS News. “There have been no other incidences like this. It’s kind of unknown as to what or why or who [did this].”

In the future, if residents see something unusual, Wangler recommends they call 911 right away. The sooner police are notified, the better, he said.

When it comes to finding unusual items on your windshield, Wangler said residents should be “vigilant.”

“If something doesn’t seem right, or the hairs on the back of your neck stand up,” Wangler said. “But by all means, we need to know about this stuff when it happened.”

Hardacre confirms she has been in touch with both Wangler and mall security.

“They are unsure what the intentions were of whoever wrapped the flannel around my windshield wiper, but it was intentional by the way it was placed,” she said. “So I have taken any opportunity to inform other people of the potential harm.”

From now on, when Hardacre works until closing time she said she’ll ask mall security or the Flint police officer on duty to escort her to her car — just to be safe.