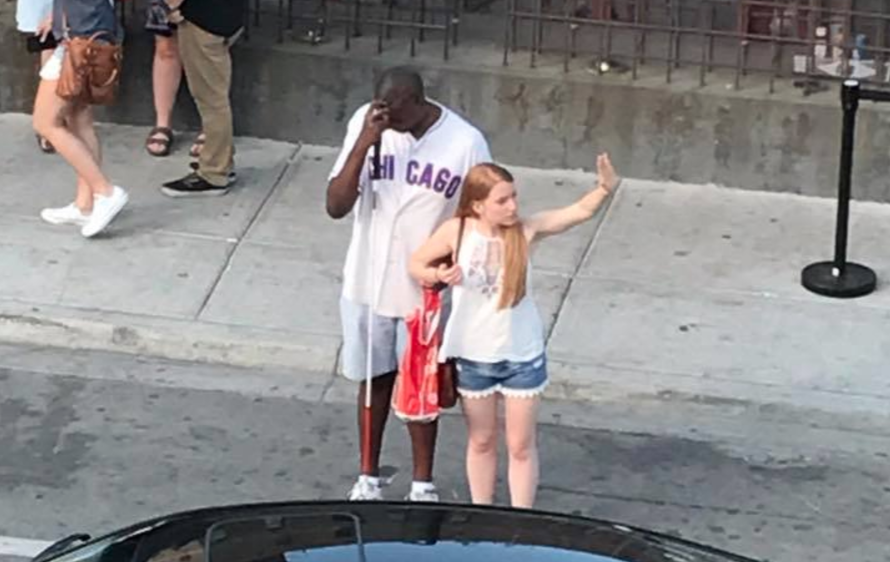 For several minutes, Ryan Hamilton watched as a blind man tried to hail a cab while Chicago Cubs fans poured out of Wrigley Field.

The Chicago resident was on a rooftop across the street when he noticed thousands of people passing the man, who was holding a walking stick and waving his hand in an attempt to stop a taxi.

Not one car stopped -- but luckily, a pedestrian did.

Casey Spelman, of Indianapolis, was visiting friends in the area and spotted the blind man, who was identified as Yusef Dale, an assistant U.S. attorney in Chicago, as she walked out of a Wrigleyville restaurant. Without a word, Spelman split from her friends, walked over to Dale and tapped him on the shoulder.

"Do you want some help getting a cab?" Spelman asked.

"He said, 'Yeah, you sound pretty, so cabs will probably stop for you before me,'" Spelman recalled Dale joking.

They chatted about baseball and how crowded the area was after a Saturday afternoon game as Spelman stepped out into the street to flag down a cab. Within minutes, a taxi pulled up and Spelman helped Dale inside, giving him a hug goodbye in the process.

The 26-year-old didn't think anything of her encounter with Dale. But Hamilton, who was watching from above, was so touched by the kind gesture he posted pictures of the pair on Facebook, praising the woman for lending a helping hand.

"There was a blind Cubs fan trying to hail a cab for several minutes until the lady came up and asked him if he needed help hailing a cab. She stood there with him until one pulled up," Hamilton wrote in the post that has since gone viral with nearly 8,000 shares. "Awesome to see such kindness in a world."

The next day, Spelman was surprised to see photos of herself and Dale online.

"It was a strange feeling to see photos of yourself that you did not know were taken," Spelman said. "Not only did I not realize anyone was watching, but I had no idea it would have such an impact on people."

"Such a simple pure gesture of true genuine humanity as it should be, virtuous. Kudos! An honor to witness," one Facebook user wrote.

"As a person who is legally blind and in a wheelchair myself, God bless you," another commented. "It's not as easy as one thinks asking for help or hailing a taxi."

Spelman is glad her post is inspiring others and hopes others will step outside of their comfort zones if they encounter a similar situation.

"It's OK if you are unsure of how to interact with someone, but do your best, be brave, and just be willing to help," she said. "I think if you treat someone with respect it will always be appreciated."