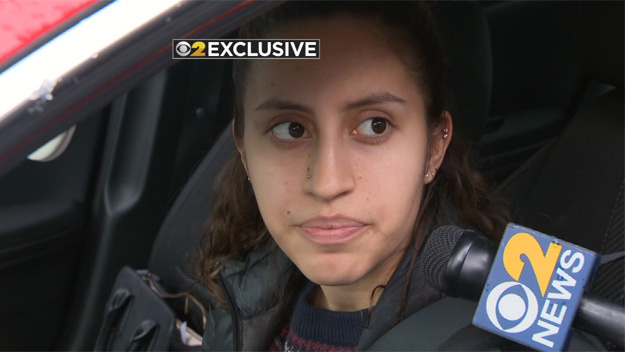 NEW YORK -- A New York City woman who was slashed while walking to her car in Queens on Sunday is speaking out for the first time in her first television interview with CBS New York.

Vannesa Echeverry, 19, has a nasty gash on her leg, but that just begins to tell the story of Echeverry's frightening attack when she was slashed by a stranger in broad daylight.

"I was honestly very shocked," she said.

Echeverry, a student at St. John's University from East Elmhurst, Queens, told CBS New York about her terrifying ordeal. She said out of nowhere, a jogger came up behind her, brushed up against her, and sliced her thigh open with an unknown object. The jogger then kept on running, Echeverry said.

"All of the sudden, he starts sprinting past me and I feel a pain in my leg, and I looked down and I was bleeding," she said.

But perhaps worse than anything, there is that nagging question she keeps asking herself.

"I honestly just want to know why he did it," Echeverry said.

She said the man did not say anything to her and she never really got a good look at him. She described him only as wearing a gray hoodie, black shorts and sneakers.

Echeverry told CBS New York she is very much aware of the recent spate of slashings in the city and finds it troubling.

But she told CBS New York she refuses to live her life afraid.

"I'm not going to let this stop me from going work, going to school, like, enjoying my life," Echeverry said.

But Echeverry did say she is going try to be much more aware of her surroundings.

Echeverry is studying criminology at St. John's and hopes to one day to be a police detective.

On Monday, police in New York City arrested a man suspected in connection with at least two recent subway attacks and a robbery at a bodega, CBS New York reported.

New York has seen a string of slashing incidents in the city's subways and on its streets since the turn of the year, leading to several arrests.