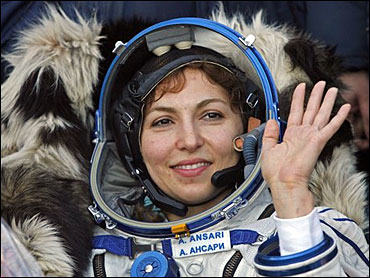 The space capsule carrying Anousheh Ansari, the world's first female paying space tourist, back to Earth touched down Friday on the Kazakh steppe after a bone-jarring journey from the International Space Station.

Ansari, Russian cosmonaut Pavel Vinogradov and U.S. astronaut Jeffrey Williams had left the station aboard a cramped Russian Soyuz capsule a little over three hours earlier. After the capsule entered the Earth's atmosphere, search and rescue teams in three planes and 12 helicopters tracked the trajectory and scrambled to help the crew out of the craft. Touchdown came about 14 minutes before sunrise.

"They're all in very good shape," said NASA spokesman Rob Navias, on the scene in Kazakhstan.

Ansari, wrapped in a fur-lined blanket to guard against the early morning chill, smiled as she sat in a chair surrounded by high grass after exiting the Soyuz. An unidentified official presented her with a large bouquet of red roses. Vinogradov, munching an apple, and Williams sat in chairs nearby. Temperatures hovered around minus 27 F.

Ansari's husband Hamid surprised her, coming up from behind her chair and maneuvering around her space helmet to plant a kiss on her mouth. Rescuers then picked up all three chairs and carried them to waiting helicopters for the flight to Kustanai, Kazakhstan, where they took part in a welcome ceremony.

All three space travelers, along with Hamid Ansari, were presented with intricately embroidered Kazakh robes and hats. Anousheh Ansari said at the ceremony that the most striking things about her space journey were seeing the Earth from space and the deep friendship developed aboard the orbiting station.

Ansari, an Iran-born American telecommunications entrepreneur, was a last-minute choice for the mission, which blasted off from the Russian manned space launch complex in Baikonur, Kazakhstan, on Sept. 18. Japanese businessman Daisuke Enomoto was scheduled to be on the launch, but he was scrubbed from the trip in late August for unspecified medical reasons.

The 40-year-old Ansari was the fourth person, and the first woman, to pay a reported US$20 million for a trip to the International Space Station. Briton Helen Sharman in 1991 took a trip to Russia's Mir station that she won through a contest.

Ansari posted a blog during her flight that's full of funny details, reports . She had a little trouble at first with space sickness, but once she got over that, she seems to have had an amazing trip. It sounds as if it was everything she hoped for, and more.

Ansari's two companions on the trip to the station, Russian Mikhail Tyurin and American Michael Lopez-Alegria, were staying aboard the station for a six-month stint along with German Thomas Reiter of the European Space Agency, who arrived aboard the U.S. space shuttle in July.

The return to Earth, though quick, can be physically taxing; the heavy deceleration once in the Earth's atmosphere — from about 500 mph to 180 mph — inflicts severe G-forces on space explorers who have spent the previous weeks or months weightless. As it nears the ground, the Soyuz fires its engines to slow the descent again to about 3 mph.

In her native Iran, Ansari has become an inspiration to many women who chafe at the country's male-dominated rule. Scores of women went to an observatory near Tehran last week to watch the space station streak across the sky at dawn.

Russian media, too, have been fascinated by Ansari's flight. As the capsule returned to Earth on Friday, the ITAR-Tass news agency reported that a Russian firm had recently begun producing custom-made underwear embroidered with the emblem of the mission.

"And a surprise has been prepared on Earth for the charming female tourist Ansari: a set of underwear with original embroidery," ITAR-Tass reported. "On the chest of the camisole is an embroidered figure of a woman made out of the logotype of the firm headed by the American businesswoman."